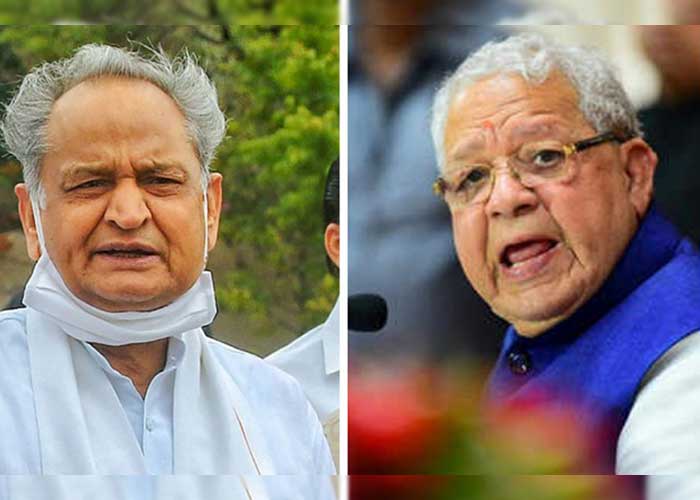 As the MLAs of the Ashok Gehlot-led Rajasthan government camp in a palatial hotel in Jaisalmer fearing poaching threats from Sachin Pilot-led rebel camp and the opposition BJP, Governor Kalraj Mishra, in an exclusive interview, says “Its unfortunate that the state govt is working from hotels”.

He rues the fact that seasoned politicians did not guide the younger lot and that is exactly why this situation arose in the first place.

Terming the situation “strange”, the Governor revealed that no one, right from the state government to the opposition have approached for a floor test on paper. However, everyone is discussing it here and there in the public and the media and there are apprehensions that the Congress government is losing the majority in the Assembly.

Speaking at length on reasons why he recently cleared the notification to convene the Assembly session on August 14, only after receiving four representations by the Ashok Gehlot government, Governor Mishra explained how he has followed all constitutional norms in the process without being biased.

Here are the excerpts…

Q: Has the state government answered all your queries now when you have approved their proposal of calling the session on August 14?

A: Yes, the final proposal sent by the state government addresses all issues which were raised by the Raj Bhavan.

The basic query on our part was what is the urgency of calling a session at a time when COVID numbers are crossing the 1,000-mark each day in the state and the seating capacity of the Assembly is also limited (in terms of social distancing).

However, the final proposal sent to us quoted the proposed date of convening the session (August 14) with elaborate reasons for calling it unlike the other three previous proposals.

This proposal included reasons such as discussing corona and a few bills for calling the session. It also says that the government has decided on new arrangements in terms of COVID norms during the session which was our primary concern.

Q: What was stopping you from giving your consent earlier?

A: Article 174 of the Constitution gives the Governor the power to summon from time to time “the House or each House of the Legislature of the State to meet at such time and place as he thinks fit…” However, the phrase “as he thinks fit” is read as per Article 163 of the Constitution which says that the Governor acts on the aid and advice of the cabinet and the state government was sending the proposal under the same article.

However, rule number 3 of Legislative Business Rules made under Article 208 of Indian Constitution says that the Governor can convene sessions on the notice of 21 days if there isn’t anything urgent. If anything is urgent, the session can be summoned earlier also. So I asked what is the urgency of calling the session when there is COVID, when all your MLAs are stacked up in the hotel and over 1,000 Corona cases are being reported everyday in the state. There will be a congregation of more than 1,200 people in the assembly, however the seating capacity is limited.

Meanwhile, the Cabinet said that it is their right to convene a session and the Governor is bound to the aid and advice of the Cabinet. So I had to say that I also have the right to question as well.

The proposal had to be sent back three times for it lacked basic information, The first proposal was sent by the state government on July 23 which was a simple informal cabinet resolution lacking date as to when they wanted to convene the session and it lacked formal approval of Cabinet.

It was returned on July 24, saying it has no date and no agenda, Later, the second proposal reached us on July 25 which was effective as it had the date mentioned and said that they want to hold the session on July 31.

But as it did not have any urgent reason for conveying the session, Raj Bhawan advised them to work within constitutional norms and told them that a session can be convened at 21 day notice. So finally, the proposal for session with effect from August 14 was finalised as the date was proposed by Cabinet and State Government assured about new arrangements have been made with respect to COVID norms, answering the Raj Bhavan queries and so the session was finalised on the said date and notification was issued.

Q: Amid the present scenario, when it looked as if the government was being toppled, wasn’t it important on your part to call a session.

Q: Had you rejected the proposal the fourth time, did the Congress government hold power to call the session on its own as was said by one of its ministers, Pratap Singh Khachriyawas?

A: It’s just not possible as Article 174 clearly empowers the Governor to summon the House from time to time. No one else has the right to convene the session except Governor. Once he gives his approval, the Speaker makes all arrangements for the session to proceed.

Q: How did you take the instant of sloganeering and dharna being staged by MLAs at Raj Bhavan? Can any disciplinary action be taken against this initiative?

A: The CM has sought 10-minute appointment from the Raj Bhavan that day and we made the arrangements accordingly in good faith. However, when the CM with all his MLAs came in four buses and staged a dharna and raised slogans, I had to express my displeasure on the same.

It was unfortunate on their part. Also, there are many families residing in this place with their kids. It was against the dignity of MLAs and Ministers.

Further, the CM made a public remark that ‘if public gheraoed Raj Bhavan, he will not be responsible for the same’. So I had to write a letter to him questioning ‘who should be held responsible’ in such conditions and told him that have never heard of any such statement from any CM.

Later good sense prevailed and things were settled. In fact, these are seasoned politicians and could have guided the young lots, but they did not guide them rightly and hence this all started.

If yes, how, if no, plz elaborate who will look in to the issues.

A: The way the COVID numbers are rising in the state raises everyone’s worries. I have had a meeting with the Chief Secretary and DGP recently to discuss COVID checks and raised a need for an effective strategy to contain its spread. Also, I met with the CM and advised him that at least his ministers should be in offices and secretariat to look after the things.

Fighting corona is everyone’s responsibility and hence we should jointly work in the same direction, was our clear communication on COVID part. Thereafter, the ministers have started going to offices and CM also started calling regular meetings and VCs.

Q: Your opinion on the political crisis in the state.

A: It is very unfortunate for Rajasthan politics as well as for the people of Rajasthan that the government is working from hotels.

Now, when the assembly session starts from August 14, they should discuss all issues related to public interest and should resolve this crisis, as corona and other development works are being affected.

Q: Video of the Speaker and CM’s son is going viral discussing how rebel MLAs could have toppled the government. Can the Speaker speak openly on challenges of saving government?

A: It is not yet verified by the Speaker or CM’s son. So I can’t comment.