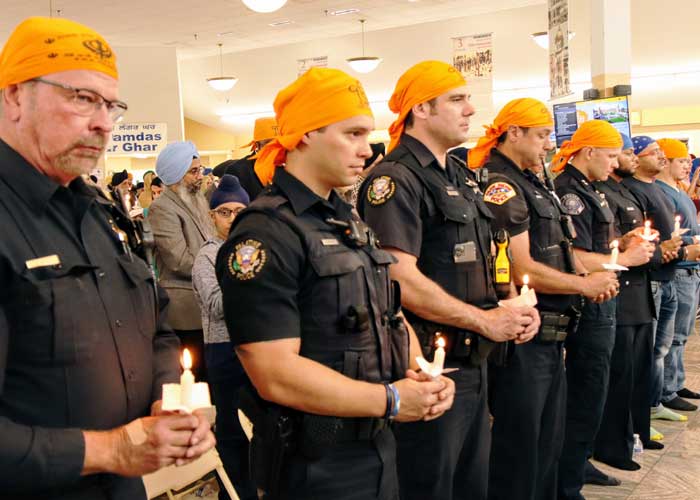 In remembrance of the Harris County Texas Sheriff Department Deputy Sandeep Singh Dhaliwal an interfaith prayer service and candlelight vigil was organized by Sikh Religious Society Palatine Illinois at Gurdwara langar hall on October 2, 2019. More than 400 people attended to pay their respects despite the torrential rain storm in Chicago area that day.

Deputy Dhaliwal was headed back to his patrol car during a traffic stop, on September 29, 2019, a man got out of the vehicle he stopped for a violation, with a pistol and shot him from behind in a cold blooded murder ambush style killing Dhaliwal. Sandeep Singh Dhaliwal is survived by his wife and three children.

Dhaliwal in his mid forties was a trailblazer in the sense that he became the first Sikh wearing beard and turban inspiring and opening doors for many others who followed him in Houston area and many parts of the country. He was honored nationwide for his ultimate sacrifice.

A 47 years old male, Robert Solis was charged with the murder of Deputy Dhaliwal.

The vigil started indoors in with Kirtan (singing of Sikh hymns) and Ardaas (Sikh prayer) in the langar hall of the Palatine Gurdwara (Sikh place of worship).

Fifteen speakers, representing the Sikh, Muslim, Christian, Jewish, gun violence prevention communities, and civil action oriented organizations and Police Chiefs and Officers and local legislators addressed the gathering. The speakers paid tributes to Deputy Dhaliwal for his exemplary service to his community on the job in uniform and also as a private citizen in times of need during natural disasters.

The speakers shared their personal stories of who Deputy Dhaliwal was and what he meant to the community and Sikh youth. They reminded the audience that gun violence impacts every community and all religions, races and ages.

Rajinder Singh Mago coordinated the organizing committee and moderated the speakers panel. Laddi Singh gave a vote of thanks at the end and recognized elected officials.

There were more than a dozen police officers including Sikh officers from the neighboring towns and one Officer Singh from Michigan attended the vigil. They were thanked for their service, honored for their sacrifices, and given a rousing standing ovation.

Police officers Pardeep Singh Deol and Daman Singh took turns to announce the 94 police officers killed in line of duty this year and a candle was lit for each one of them.

Finally a moment of silence for all fallen police officers in line of duty including Deputy Dhaliwal was observed and candles were lighted in their honor.

All the participants of the event were invited to partake “langar” the community kitchen vegetarian meal.