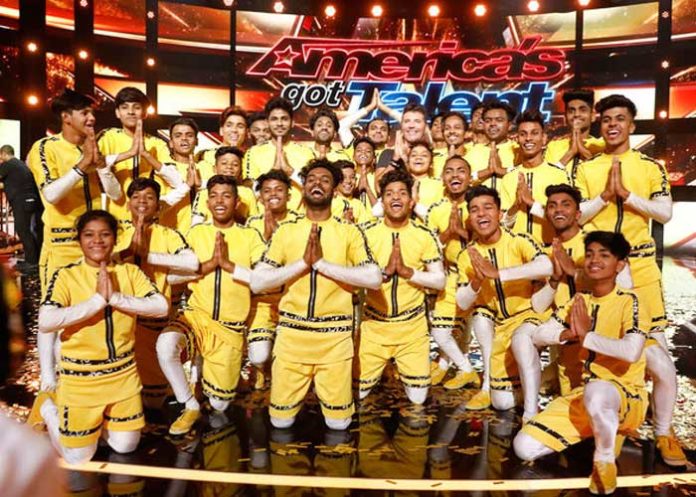 The Mumbai-based dance group V Unbeatable have been winning fans on “America’s Got Talent” for a while now, with their death-defying moves and earning the Golden Buzzer. Ask them what the secret inspiration of their success is, and they mention the name of Bollywood superstar Ranveer Singh. The troupe, comprising around 29 members aged between 12 and 27, is unanimous in saying they would love to work with their lucky charm Ranveer someday.

“Whenever, we perform on Ranveer Singh’s songs, our performance is a hit. So, we decided to stick to his numbers mostly for our performances on ‘America’s Got Talent’,” troupe leader Om Prakash Chauhan told.

“Initially, when we thought of participating on the international dance reality show, we thought we wouldn’t be allowed to use too many Bollywood tracks because the audience wouldn’t understand. All the same, we decided to use a Hindi song with beats and melody. That’s when we realised most of Ranveer’s songs fit the bill,” Chauhan added.

The result was magic. Judges Gabrielle Union, Howie Mandel, Julianne Hough and Simon Cowell stood up in appreciation after their performances in the audition round. The group had grooved to “Malhari” from the film, “Bajirao Mastani”.

The group’s bond with Ranveer grew after they met the actor watched them perform on “Dance Plus”. Ranveer was so impressed by their dancing that he matched steps with them on the show.

“Ranveer has great energy, power and is a ‘hatke’ artist, with no attitude or arrogance. We want to work with him some time soon,” Chauhan said.

On “America’s Got Talent”, after being selected, the troupe would go on to enthral all in the Judges’ Cut round, too.

It’s not been an entirely happy story for the group, though. Six years ago, they lost Vikas, one of their performers, during rehearsals. The group agrees Vikas’ untimely death only inspires them to do better.

In fact, during the Judge’s Cut round, every member of the troupe wore yellow tees with ‘Vikas’ written on the back, as a tribute to their departed groupmate.

Their performance on Ranveer’s energetic number “Tattad tattad” from the film “Goliyon Ki Rasleela: Ram-Leela” got them the Golden Buzzer from guest judge and star basketball player Dwyane Wade on the show, which is aired in India on Colors Infinity.

Their dance, acrobatics, coordinated dives and choreographed stunts have left judges and the audience in awe. One particular moment, one of the youngest member of the group leapt from behind the judges and landed straight on the stage, almost brought the house down with thunderous applause.

The group is now set to go to Hollywood for their live show, which is expected to be held in August.  (Agency)