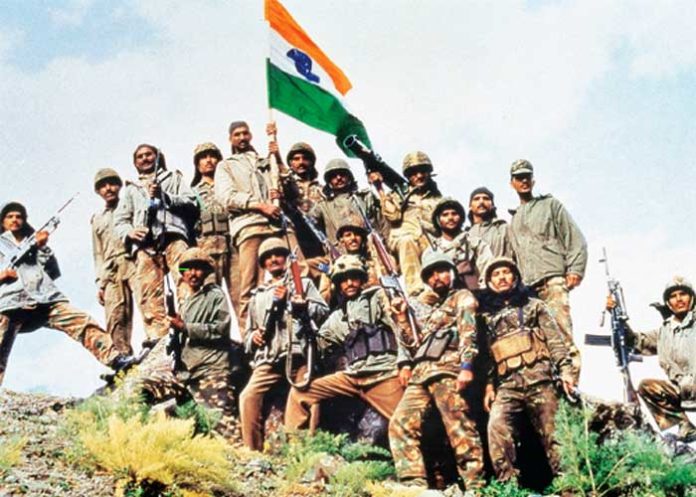 The Indian Army is set to mark the 20th anniversary of ‘Operation Vijay’ to commemorate its victory during the Kargil War against intruding Pakistani troops who had occupied the icy heights in 1999.

‘Remember, Rejoice and Renew’ is the theme with which the Indian army is going to celebrate the 20th anniversary of ‘Operation Vijay’.

The nearly three-month-long Kargil War ended on July 26, 1999 after Pakistani irregulars and troops, mostly drawn from its Northern Light Infantry, were pushed back and the peaks in Kargil, Drass and Batalik were recaptured by the Indian Army.

A Defence Ministry spokesman said the celebrations will be spread over three days, from July 25 to 27.

The covert intrusions on mountain peaks by Pakistani troops and militants were reported to the Indian Army by locals living close to the line of control (LoC) in Kargil district in May 1999.

“As a part of celebrating 20 years of Kargil Victory commemorative treks were organised by 13 Jammu and Kashmir Rifles (JAK RIF) – known as the ‘Bravest of the Brave’ – and 18 Grenadiers to Batra Top and Tiger Hill. Many battles define the Kargil War and one such battle which stands out is the battle of Point 4875,” the spokesman said.

The recapture of Pt 4875 was pivotal during Operation Vijay and 13 JAK RIF had achieved the impossible during this battle, he said.

“No one can forget Captain Vikram Batra who had decimated the enemy through his heroic acts and his famous ‘Yeh Dil Maange More’ which had the entire nation in awe of this war icon.

“To commemorate this victory as part of the 20th anniversary of Operation Vijay a trekking expedition to Batra Top was also undertaken by 13 JAKRIF.”

The objective of the trek was to celebrate the triumph of the battalion over the enemy as also to pay homage to the brave soldiers who laid down their lives in service of the nation.

“The trekking team of the 13 JAKRIF Battalion was flagged off on July 6 by Commander, Drass Brigade. The team comprising of one Junior Commissioned Officer, and 10 other ranks moved from Drass and set forth on their trek across the treacherous, harsh mountainous terrain of Drass Sector and summited Batra Top,” the spokesman said.

At the summit the team was received by Lt Gen Y.K. Joshi, General-Officer-Commanding, Fire and Fury Corps.

“The General Officer was the Commanding Officer of the battalion at the time of the Kargil War. He shared his reminiscences of the war in a candid manner and acknowledged the sacrifices of all the soldiers,” he said.

Another battle which aroused national fervour was the Battle of Tiger Hill in which troops of 18 Grenadiers valiantly fought and evicted a well-entrenched enemy.

“It was sheer resilience and determination of these bravehearts who were undeterred by the enemy firepower and were willing to go the extra mile to dislodge the enemy from their positions,” he said.

Tiger Hill is symbolic to Operation Vijay and stands tall in Drass sector as an epitome of the sacrifice, bravery and heroism of many unsung heroes who laid down their lives in the capture of the feature, the defence ministry spokesman said.  (Agency)