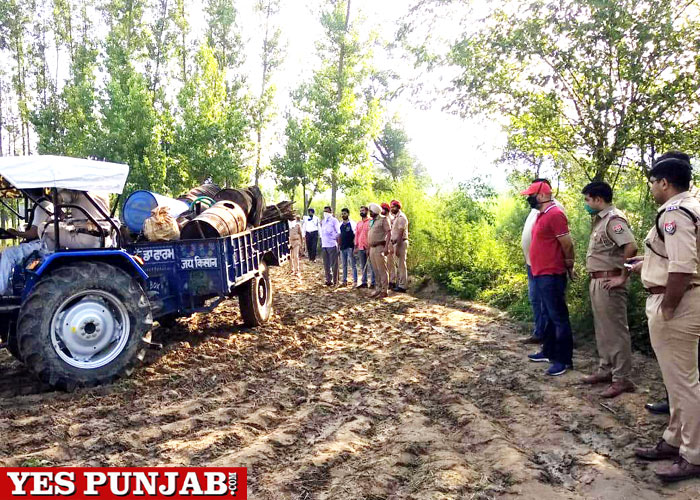 Cracking down on illicit liquor trading and smuggling from across the border, the Ropar police on Friday arrested five persons and seized the biggest ever cache of illicit liquor, in a massive 10-hour long operation in the tough forest terrain of the Himachal villages of Majri and Dabt.

Seven working stills (daru ki bhattis) and 2 lakh kgs of lahan (kacchi daru) were seized in the operation, carried out from 3 a.m.till 1 p.m., in a dense forest area, full of thorny bushes and seasonal rivulets. The police team had to cut through the dense and thorny undergrowth to get in, said Ropar SSP Swapan Sharma, adding that the operation was carried out jointly with the Himachal police.

As many as 22 police teams comprising seven police personnel each participated in the massive operation. The teams cordoned off the entire area around the villages, located about 2 kms from the Punjab border, said Sharma, adding that the search operation covered a six kilometres long stretch along the state border.

Investigations were in progress to trace further links of the accused across Punjab and Himachal Pradesh, Sharma said.

The seizure came amid state-wide efforts by the Punjab Police, under the directives of Chief Minister Captain Amarinder Singh, to check illicit liquor trading, as well as smuggling of liquor from across the state’s borders.

SSP Sharma said the two Himachal villages, along with the area around them, are notorious for liquor and drug smuggling. The smugglers take advantage of the forest cover and the lack of access in the tough terrain to sneak from Himachal Pradesh into Punjab with their hauls. In the last 5 years, 26 cases in Punjab and 38 cases in Himachal have been registered against people hailing from these areas.