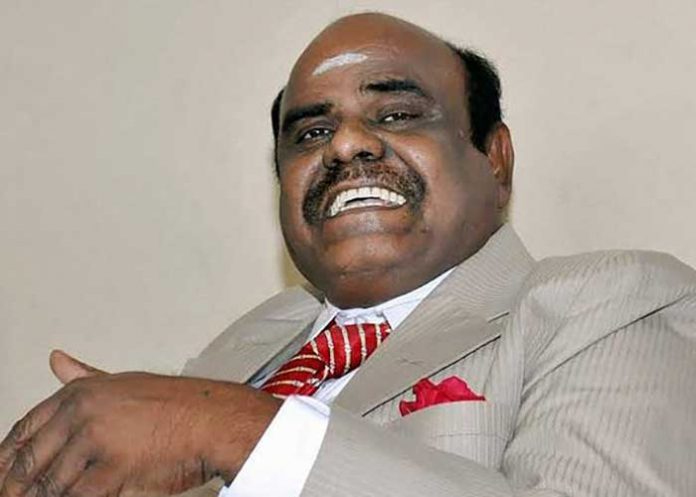 Chennai, Oct 28, 2020-
Retired High Court Justice C.S. Karnan is happy at the Cyber Crime Wing of Chennai Police booking a case against him as he was fighting for the same for the past several years.

“I am happy that a case has been booked against me. When the case goes to trial, I can bring to the public knowledge the issues that resulted in me being jailed for contempt of court for six months in 2017 as ordered by the Supreme Court,” Karnan told.

He said he would cooperate with the Chennai Police if called for any enquiry and expects the trial to begin soon.

“The Cyber Crime Branch has booked a case against retired Justice Karnan after 10 women lawyers wrote to the Chief Justice of India against him and the apex court’s asking the advocates to approach the appropriate authorities,” Peter Ramesh Kumar, the counsel for Karnan told on Tuesday.

“The Cyber Crime Branch has booked me under Sections 295 and 351 of the Indian Penal Code (IPC) and also under the women’s harassment laws. I am yet to get a copy of that,” Karnan said.

A practicing advocate of the Madras High Court S. Devika had lodged the complaint against Karnan.

“The complainant is not an aggrieved party. Only those who are directly aggrieved like retired Supreme Court Justice R. Banumathi can lodge a complaint,” Karnan contended.

“Why the complainant is not lodging any complaint against the harassment met to Dalit women local body heads,” he added.

Karnan had recently released a video in which he was heard making objectionable comments and threatening of sexual violence against judiciary officials and their family members.

Queried on the issue of trespassing into Banumathi’s residence Karnan said: “There was no trespassing. I had entered my name and other details in the visitor’s book kept at the residential apartment block where she is living. With the permission of the security officer I had gone to her residence and knocked the door.”

Karnan alleged Banumathi’s son-in-law and daughter had tried to assault him and a police complaint has been lodged against them.

It may be recalled that when Karnan was a judge in the Calcutta High Court, he was sentenced for six months jail term for contempt of court in 2017 by the Supreme Court. He was arrested by Kolkata Police and served his jail term. (Agency)