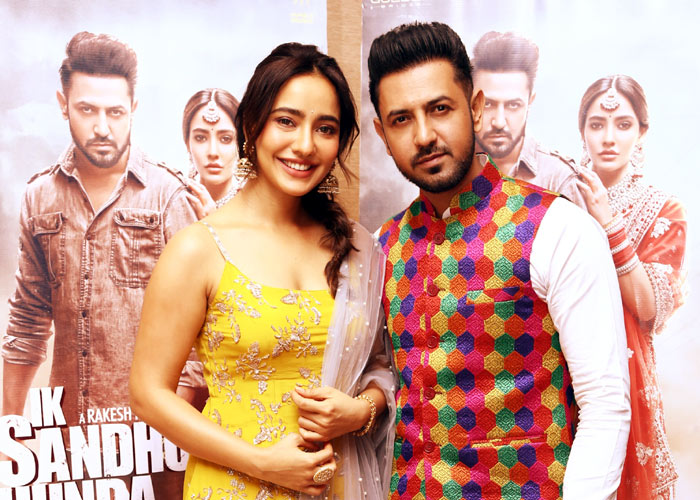 This film features Gippy Grewal and Neha Sharma in lead roles. Along with them Dheeraj Kumar, Babbal Rai, Raghveer Boli, Roshan Prince, Vikramjeet Singh Virk are playing pivotal characters. Rakesh Mehta has directed this action-romance caper. The story of the film is written by Jass Grewal. Sham Kaushal has directed the action sequences in the film.

On this occasion, Gippy Grewal said, “Ik Sandhu Hunda Si is not just an action film it is a complete package of romance, friendship, emotion. Till now, the response songs and trailer has received is beyond our expectations and we just hope this will continue with the film also.”

The leading lady of the film, Neha Sharma said, “This is my first Punjabi film, I am quite excited about my new innings. I just hope people will accept me in this new avatar.”

Revealing his character, Roshan Prince said, “When I got this script, I was so impressed with my character (Gill) particularly. I am sure that this character will leave an impact on the audience.”

Babbal Rai on his film and upcoming projects said, “My character is not shown in the trailer, which has created the curiosity among the audiences. I just hope when they will finally watch it in the film, it will not disappoint at all.”

Sharing his views captain of the ship, Rakesh Mehta said, “As the release of the film is just around the corner. So, the whole team is putting their best forwarding in promoting the film. I believe we have done our job now it’s up to audiences how they are going to perceive it.”

Producer of the film, Bally Singh Kakar quoted, “Being the producer of this film, we are quite confident about our project. Having such a talented star cast and team onboard has been a wonderful experience. We are quite sure that this film will set a benchmark for action-romantic films in Pollywood.”

The worldwide distribution of the film is done by Munish Sahni’s Omjee Star Studios. ‘Ik Sandhu Hunda Si’ will hit the theatres on 28th February 2020.