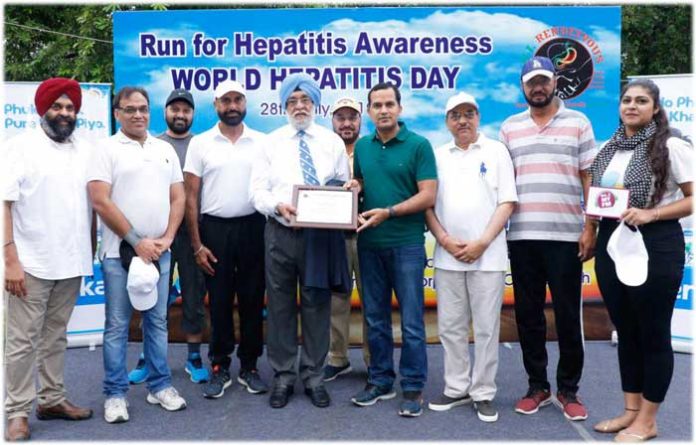 GI Rendezvous, a group of healthcare professionals who got together to bring about academic and health awareness activities amongst medicos and general population, organised an event titled ‘Run for Awareness’ highlighting World Hepatitis Day commemorated globally on 28th of July every year by World Health Organisation.

This year’s theme, “Find the missing millions” was though aptly highlighted by Dr. R. K. Dhiman, Prof. and Head of Hepatology, PGIMER and Chairman National Viral Hepatitis Control Programme, he also shared his thoughts regarding protecting the liver and eliminating Hepatitis, to an audience of about 300 people most of them being ‘runners’ at Sukhna Lake and appreciated their efforts to help create awareness.

On the occasion, Padma Shri Hockey Olympian Ajit Pal Singh, the famous 1975 World Cup Winner Hockey Captain was especially in town to flag off the run. He added to Dr. Dhiman’s words by saying that liver is a vital organ and it’s well being means overall robust health of a person. The participants were seen jostling to take pictures with the hockey legend. He shared 1975 World Cup moments with children and motivated them.

Mr. K. K. Yadav, IAS, Commissioner Municipal Corporation and Sports Secretary, Chandigarh felicitated the two distinguished guests and said it was a great honour to be present at such an event. He further added that the Municipal Corporation supported the event to create awareness amongst masses with regard to keeping oneself fit and healthy.

On the GI Rendezvous Conveners, Dr. Gurbilas P. Singh and Dr. Sukhbir Singh Sodhi said that they were overwhelmed to see a number of their medical colleagues from different streams and from different hospitals of tricity participating in the event with great enthusiasm along with many others from Chandigarh Runners and IndusInd Bank Runners who had come from as far as Karnal.

Team GI Rendezvous said that they had been commemorating the World Hepatitis Day for the last 3 years throughout Punjab, but the enthusiasm and dedication shown by tricity is immense.

It is worth mentioning that the treatment of Hepatitis C which used to run in lakhs of rupees has been provided free to all since 2016 in Punjab followed by Haryana and the model is now famous as the Punjab Model developed by Dr. R. K. Dhiman and his team in PGIMER. The model is now being replicated in other states and Dr. Dhiman informed that Maharashtra is doing this from today onwards.