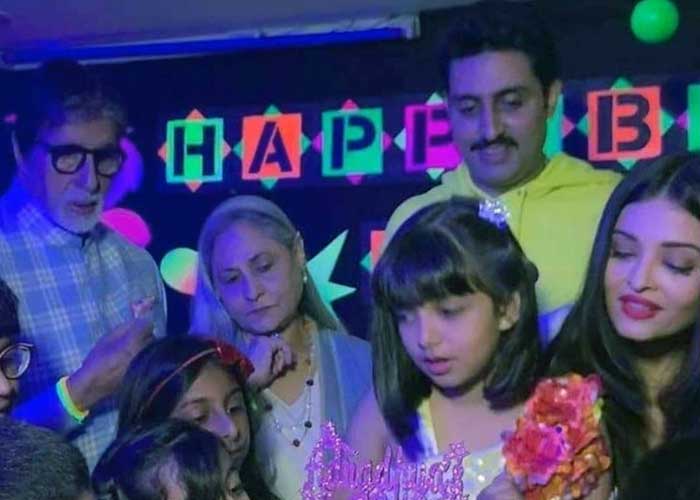 Like every year, the Bachchan family, this time too, hosted a grand bash on Aaradhya’s birthday.

From Shah Rukh Khan to Karan Johar and Riteish Deshmukh, several stars along with their kids attended Aaradhya’s 8th birthday party, which was held here on Saturday.

Several pictures and videos from the celebrations are doing the rounds on the Internet. In one of the videos, little Aaradhya is seen enjoying a ride on the ferris wheel with her mother Aishwarya Rai Bachchan and father Abhishek Bachchan.

Aaradhya wore a pink frilly dress on her special day.

Sharing a glimpse of his granddaughter’s birthday party, Amitabh Bachchan took to his blog and penned a lengthy note, sharing how celebrations have changed over time.

“The child grows up .. and celebrations keep in growth too .. for long have the traditions of the British been kept in place .. that of the cake .. I presume that a cake was a rarity during the time of the inception of this tradition .. so it became a rarity and hence to be brought about on special occasions .. the candle and the number of them for age and its blowing has remained for too long but what be the tradition or history of it…in my and our tradition in this part of the world the blowing of candles is an indication of an end .. here the blowing is an achievement of celebration .. so do we continue or change or what .. we in our family did .. the cake was replaced by a ‘khoye’ ki barfi’ and no candles..are agarbatti jalo , kuch aur karo lekin batti na bujhao,” he wrote.

Big B also shared a photograph in which a star is seen painted on his face.

“The star on the face is the painted stall on the birthday celebrations of the ‘little one’ .. luminosity was the predominant theme among the young .. and each were lit up with their eminence .. the joy of seeing the young is the surprise of seeing their growth .. rapid mature and in an entirely different environ than ever before .. and to express surprise are the seniors as well,” he added.

Aaradhya was born in 2011, four years after Aishwarya and Abhishek tied the knot in 2007.  (Agency)