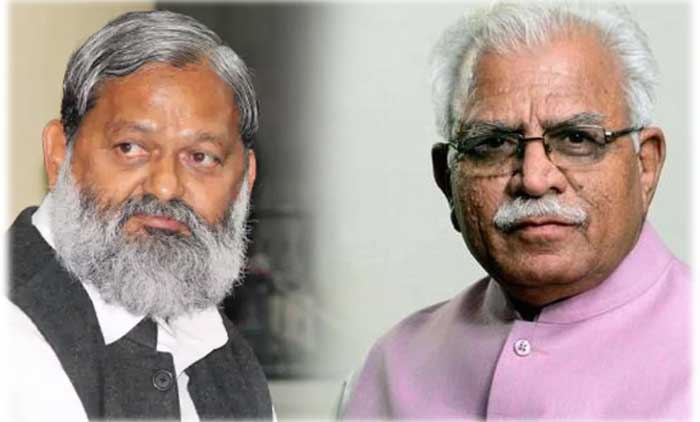 In a fresh tug-of-war in Haryana between Chief Minister Manohar Lal Khattar and his Home Minister Anil Vij, the latter has asked the former to chargesheet and remove Criminal Investigation Department (CID) chief Anil Rao.

It is learnt on Tuesday that Vij, who is unhappy with Rao, has asked the Home Secretary to remove him for “inefficiency, insubordination and dereliction of duty”.

In a letter written to Khattar, Vij said the CID chief did not apprise him in routine about the current law and order situation in the state.

Vij demanded that Rao should be replaced by Shrikant Jadhav, another senior Indian Police Service officer.

Jadhav was suspended by the previous BJP government for negligence during the 2016 Jat quota violence. He was later reinstated on technical grounds.

A “war of supremacy” is already on between Khattar and Vij over the control of the CID.

Khattar has clarified many a time that the CID has been under the Chief Minister and not under the Home Minister as per the practice followed for decades.

Even the official website shows Khattar has 17 portfolios, including the CID, with him.

But Vij believes the CID is part of the Home Department and he has shown his displeasure over its functioning on several occasions.

He has recently constituted a three-member committee headed by Home Secretary Vijai Vardhan to improve the functioning of the CID.

Officials told that the Business of Haryana Government (Allocation) Rules, 1974, shows the CID as part of the Home Department.

But the rules state that important cases relating to the CID are to go through the Chief Secretary, not the Home Secretary.

Now, it is to be seen whether the Chief Minister acts against the CID chief or not.  (Agency)