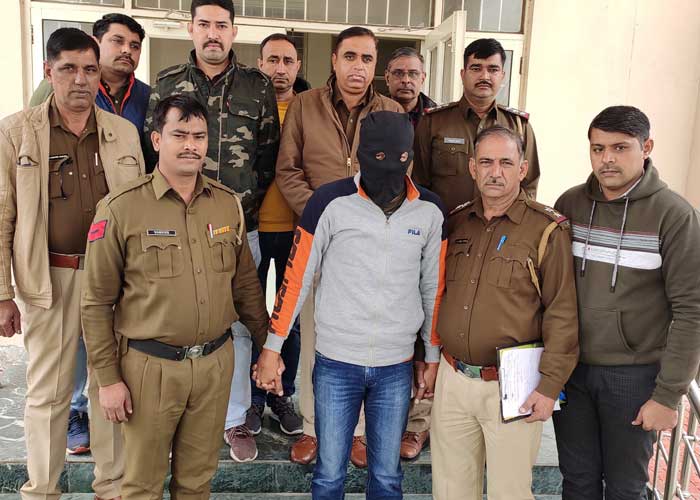 In a major success, Haryana Police have arrested Naveen Budhwar, an absconding criminal, from Goa who has about a dozen of criminal cases registered against him.

Giving this information here today, a spokesman of Haryana Police said that accused was arrested by the special team of detective staff, Rohtak Police following specific inputs. A resident of village Sunaria in Rohtak, Naveen was wanted for several crimes including attempt to murder, loot, threat to kill and assault.

During preliminary interrogation, it was revealed that accused Naveen had run a Photostat shop in his house. His brothers Pankaj Budhwar and Praveen Budhwar alias Tinku are in judicial custody in separate cases. Accused Pankaj has been involved in a fatal attack on retired police officer Hukam Singh. The accused will be taken on police remand by producing in the court. It is expected that other cases can be disclosed during the remand period.

3. He was declared a proclaimed offender by Rohtak Court.

4. He alongwith his accomplice had assaulted and threatened to kill Manoj, a resident of Naya Padav on 03.04.2015.

5. Accused alongwith his accomplice assaulted constable posted on patrolling duty and tried to snatched his service revolver on 03/04.09.2017.

6. He alongwith his accomplices had attacked Ashutosh, a resident of Naya Padav on 16.04.18.

7. Accused had assaulted and attempted to kill Jitender of Harisingh colony on 12.11.18 and also demanded a sum of Rs5 lakh.

Accused was absconding in following incidents:
1 He had threatened to kill Harsh Vardhan, a resident of Janta Colony, on 24.11.19.

2 In March 2019, his brothers Pankaj Budhwar and Praveen Budhwar alias Tinku threatened to kill Sukhdev and case in this connection was registered in Thana Shivaji Colony. In the case, the accused have been arrested. Matter is still under Court consideration. On 24.11.19, Naveen contacted Sukhdev’s on his mobile and threatened to kill him if he gives evidence against his brothers.

3 On 29.11.19, Naveen had fired gun shot on Harsh Vardhan, a resident of Janata Colony, and the bullet was hit at window pane of car parked at Harsh vardhan’s house. The accused escaped from the spot.

4 On 31.05.19, accused Naveen, along with his aides Pankaj, Mohit alias Shooter and others, had looted about Rs4.5 lakh and a laptop from the employee of the company. While all the other accused have been arrested, Naveen was absconding.