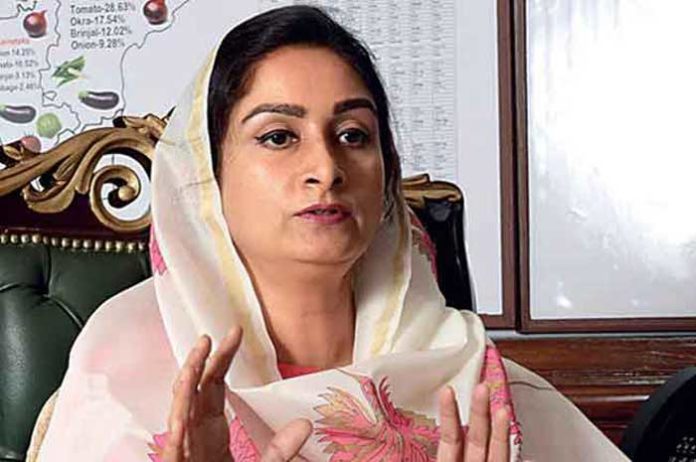 Chandigarh, April 12, 2021 (Yes Punjab News)
Former union minister Harsimrat Kaur Badal today said widespread shortcomings in management of Covid reported by the central team which visited the most affected districts of Punjab was a clear indictment of chief minister Capt Amarinder Singh who had chosen to ban the political activities of the opposition instead of doing anything to improve medical infrastructure and healthcare system in the State.

Asserting that the chief minister was directly responsible for the present State of affairs, Mrs Harsimrat Badal said the mortality rate in Punjab was one of the highest in the country because Capt Amarinder Singh had refused to take control of the situation from the very start.

“The chief minister isolated himself in his farm house and subsequently Punjab witnessed scams in procurement of Covid care items, large scale irregularities in testing, scams in procurement of Covid kits and shortage of ventilators and ambulances. All this resulted in people shunning government facilities and a complete lack of faith in the government efforts to control the spread of the pandemic”.

Mrs Harsimrat Badal said these aspects were also reflected in the report of the central team which disclosed that the situation was dire in worst affected districts of Patiala, Ludhiana and Mohali because contact tracing exercise was not being done.

She said similarly the team had reported low testing as well as lack of a testing laboratory in Ropar besides lack of dedicated Covid hospitals in Ropar and Mohali. “The Punjab government has also been indicted for slow place of Covid vaccination”, she added.

Asking the chief minister to take stock of the situation personally and visit the nine worst affected districts to ensure required changes occurred at the ground level, Mrs Badal said it was unfortunate that the Congress government had failed to upgrade medical infrastructure in all districts of the State even one year after the onset of the pandemic.

She also asked the chief minister to act on the report immediately and take action against officials responsible for the deficiencies reported by the central team. “An audit should also be done on the money used to counter the pandemic and misuse of Covid funds should be identified and acted upon”.

The former union minister also asked the chief minister to stop using Covid as an excuse to strike out at his political opponents adding even as political gatherings of the SAD had been banned Congress ministers were indulging in a stone laying spree and addressing public meetings across the State.

She also asked the chief minister to take decisions on scientific basis, stating illogical steps like night curfew should be done away with. She also asked the government to take note of the economic devastation being caused due to some restrictions and the need to rationalize them to ensure business did not flow to neighbouring States.

She also called for improving tertiary care in government hospitals besides calling for the need to intensify the vaccination drive.