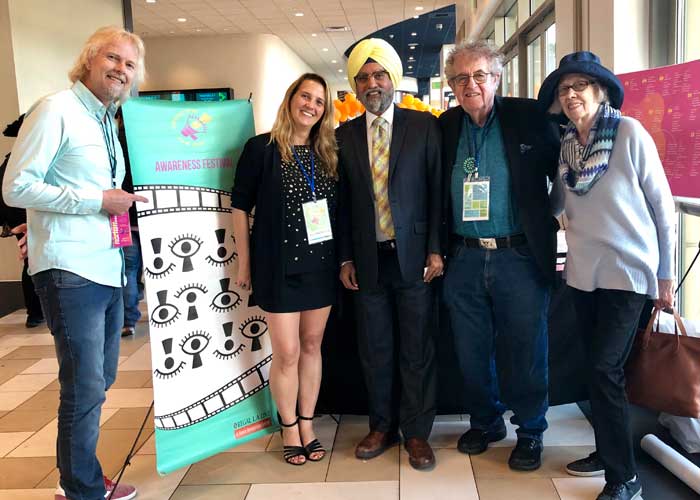 The Director of Guru Nanak documentary was declared as best director at Awareness film festival at Los Angeles. Over two hundred people attended the screening of the film at this film festival which featured over 40 films from all over the world focusing on various social and cultural causes.

This is the first documentary made in English which narrates Guru Nanak’s history and his teachings featuring prominent Sikh luminaries, leading authors and reputable authors. Gerald Krell is President of Auteur Productions and a renowned filmmaker.

He has produced and directed award-winning national public television interfaith documentaries including most recently: “Your Health: A Sacred Matter.”

He started exploring to make a documentary on Guru Nanak the founder of Sikhism in March 2018 and spent over 3 months researching on the subject.

He read many books and biographies of Guru Nanak written by many authors in the United states and in India and he interviewed many articulate authors like Dr. Nikky Guninder Kaur, Mark Juergensmeyer, Ambassador Ahmed Akbar, Robert Thurman, Bishop John Chane and Mayor Ravi Bhalla.

Gerald Krell said “ I am really humbled by the decision of the organisers of this film festival and I appreciate the confidence that the supporters of this endeavour had on me. He added “ I think that the philosophy of equality and tolerance put forth by Guru Nanak 550 years ago is very relevant in today’s divided and polarised world. I urge to the Sikh community worldwide to use this film to reach to the wider audience all over the world.”

Dr. Rajwant Singh, Co-Founder and Senior advisor National Sikh Campaign, Said “ Getting a prestigious film award of best director for Guru Nanak documentary proves the potential this film has to reach out to the non-Sikh audience in the western world and to create a positive impact for Sikhs.” NSC had supported this documentary and PBS channel will be showing this documentary at 200 TV stations all across United States early next year.

Dr. Lakhwinder Singh Randhawa, Director of National Sikh Campaign said “ The response of the audience was overwhelmingly positive and people appreciated how the makers of this documentary skilfully dealt with this complex subject and made Guru Nanak’s story more relatable for the common people.”