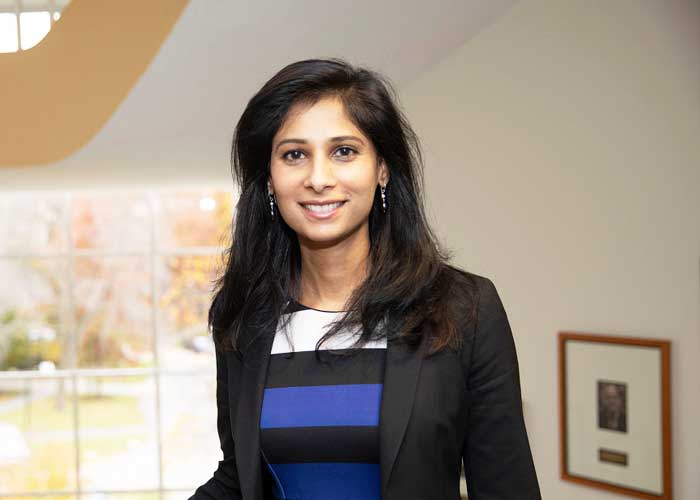 Suggesting ways for the slowing Indian economy to revive, International Monetary Fund’s (IMF) Chief Economist Gita Gopinath on Friday said that government should stick to the target of fiscal consolidation.

“For India, macro stability is very important, which means stability on the fiscal front… clear sense of keeping to the target of fiscal consolidation. Now that would require both increasing revenue mobilisation and also rationalising expenditure. So, these are some of the issues that need to be addressed,” she said at FICCI’s 92nd Annual Convention.

The government has set a target of restricting fiscal deficit for the current financial year at Rs 7.03 lakh crore or 3.3 per cent of the Gross Domestic Product (GDP).

Further, the Indian-origin economist pointed out the need to raise productivity in agriculture in the country which would eventually raise rural income.

She further disclosed that some high frequency indicators did not shown an increase in India’s growth during the third and fourth quarters as was anticipated earlier.

“Our expectation was that the first two quarters of fiscal 2019-20 would be a slowing scenario and then there would be an uptick in the third and fourth quarter. Looking at some of the high frequency indicators, we are not seeing the kind of uptick we were projecting, so this is why I mentioned that we will be revising the numbers again in January,” she said.

About regulatory issues in the country, Gopinath said that regulatory uncertainty in India is one of the reasons for the ongoing economic slowdown.

“I believe, in the slowdown, regulatory uncertainty has played a role. That’s another factor that needs to be addressed. It’s important for India to take up reforms but to be able to do this with greater clarity and greater certainty would help,” she said.

Regarding the Goods and Services Tax (GST) regime which is termed as India’s biggest tax reform, she emphasised that more needs to be done to bring clarity and certainty regarding the regulations and tax rates.

“GST, which has been very important for formalising the Indian economy, but again there… certainly more needs to be done on what the rules are, what the rates are going to be….”

Implying that India has not taken the required steps to turn into a manufacturing major, Gopinath said that the country needs a separate set of reforms to become a manufacturing and export hub.

She suggested that India reform its land acquisition and labour laws.

“To get manufacturing off the ground and for India to have bigger presence on the export stage, that would require another set of very big reforms. There are important reforms that are needed with respect to land acquisition, labour laws and it is hard to generate an ecosystem where you can end up with large scale manufacturing,” she said.

Gopinath also observed that India has not been able to utilise the opportunity to join the global supply chain during the change international trade dynamics in recent times.

“India is missing out on what we are seeing globally in terms of shift in global supply chains around the world, with all the developments we have seen over the last year. These (reforms) need to be undertaken, they are good for the economy more broadly,” she said.  (Agency)