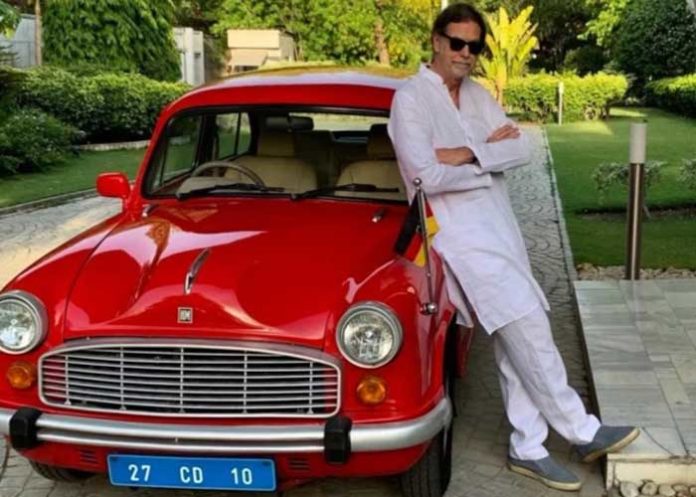 With his pony tail, his playing the flute at an event in Delhi, taking metro rides by himself to old Delhi, and travelling in a bright red ambassador car, Germany’s envoy to India Walter J. Lindner cuts a cool, unconventional figure, very different from the formal vision that a diplomat conjures.

Lindner, who surprised everyone with his visit to the Rashtriya Swayamsevak Sangh (RSS) headquarters in Nagpur this week where he met RSS chief Mohan Bhagwat, also took a ride in the Nagpur metro and had delighted commuters click selfies with him. The uber cool envoy also went on a bike ride along with others in Nagpur.

The musician-diplomat, who plays the piano and flute with ease, visited Deekshabhoomi in Nagpur, and a leprosy centre of the Ecumenical Sangam, a community health and development organisation supported by the Indo-German Cooperation, a registered society. Many of its programmes are supported by the German government.

When Lindner presented his credentials to President Ramnath Kovind in May, he did it with a flourish in Hindi, eliciting a smile from the president.

Lindner, whose #AuntieAmbi competition is going strong on social media, on Friday presented a #babyambi, a small red replica of the red ambassador car he drives around in, to his driver Farid Khan.

“Farid is one of our most reliable drivers,” said Lindner. “He primarily drives the famous red ambassador and is now a proud owner of a baby Ambi! I wish him all the very best for the future.”

In June when he launched the #AuntieAmbi competition, his post was a hit. With miniature red ambassador cars in the picture, including one in the palm of his hand, Lindner wrote: “Isn’t that the cutest Baby Amby ever?? Wanna own one? Well, it’s very simple: just spot our red Auntie Amby Ambassador car on the streets of Delhi, take a photo and tag it on our Embassy account on Facebook, Instagram or Twitter! Happy clicking!”– and the response was immediate.

The envoy says the reason for driving around in an ambassador car that even Indian government officials have given up on is out of “respect for India”. He could very well have come in a Porsche, but he chose the antique Ambi instead to make a statement. And he has got many people appealing to him not to throw away the car.

He says the relationship between Germany and India is a very close one with Chancellor Angela Merkel and Prime Minister Narendra Modi sharing friendly relations “but there is always room for improvement”.

The ambassador posed outside Delhi’s Sundar Nursery on World Environment Day, June 5, attired in a blue kurta, and, in a video posted from the site, said in the manner that a garbage dump could turn into a beautiful green spot, there is hope for both countries to work together to save the planet.

Similarly on International Yoga Day on June 21, the ambassador, attired in kurta-pyjama with an angavastram around his neck, did yoga with other members of the embassy.

On July 11, Ambassador Lindner played the flute at the Gandhi Mandela Peace Initiative in the capital, at a concert by Grammy Award Winner, US Billboard artist and environmentalist Ricky Kej.

Lindner’s connection with India is decades old. He had come to India as a backpacker over 40 years ago, and even went by metro one day to see the Jama Masjid, the spice market and other places in old Delhi. which he feels have retained their old charm.

An ambassador to look out for!  (Agency)