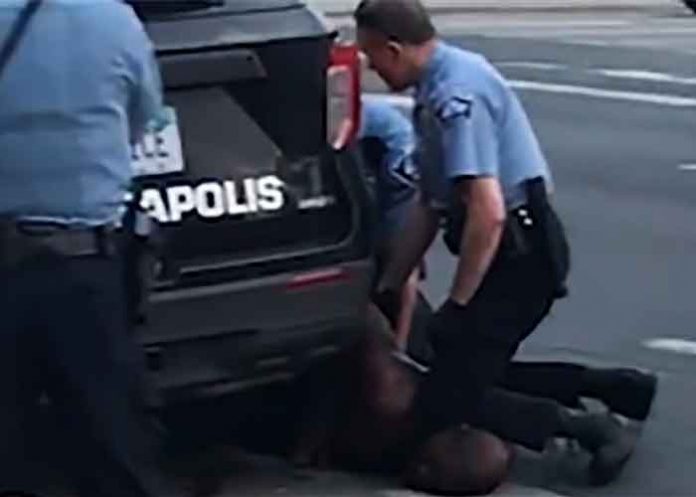 New York, April 21, 2021-
In a catharsis for a nation rocked by protests and racial tension for nearly a year, a White former policeman has been convicted of murdering an African American man by kneeling on his neck.

President Joe Biden said after the verdict on Tuesday that the killing had “ripped the blinders off for the whole world to see the systemic racism” in the US.

The verdict against Derek Chauvin in Minneapolis brought a sense of relief and peaceful celebrations around the country after fears that he may be acquitted or convicted only on lesser charges.

The killing of George Floyd while he was being arrested on allegations that he paid a store with a forged note in May last year was the catalyst for a reckoning of the centuries of oppression on racial minorities in the US and led to a reexamination of attitudes, laws and traditions, going beyond just police brutality.

Under the US justice system the verdict was given by 12 jurors, a panel made up of lay citizens, who heard nearly three weeks of testimony and legal arguments presided over by a judge and discussed it for about ten hours spread over two days.

During the nationally televised trial, the jurors — six whites, four blacks and two of mixed ethnicity — and the viewers saw a recording made by a teenaged girl showing Chauvin kneeling on Floyd’s neck for nine minutes and 29 seconds as repeatedly pleaded, “I can’t breathe.”

Those words, “I can’t breathe,a¿ became the rallying cry of the rejuvenated Black Lives Matter movement that cut across racial lines raising the national consciousness.

Floyd’s brother Philonise said that after the verdict “we are able to breathe again.”

Significantly, the harrowing video of the killing saw the collapse of the so-called “blue wall of silence,” the closing of ranks by police to protect their own, and police officials called as witnesses acknowledged that Chauvin used excessive force and did not conform to training.

Bill Johnson, executive director of the National Association of Police Organizations, acknowledged, “A man lost his life needlessly at the hands of an officer.”

In a summer of discontent seething under the Covid-19 restrictions and the economic distress the protests sometimes descended into rioting and looting of stores. The rage led to excesses like defacing destroying the statues of Mahatma Gandhi and Abraham Lincoln, who had led the US in the Civil War to uphold the abolition of slavery.

After the verdict, Democratic Party member of the House of Representatives Pramila Jayapal described the movement’s agenda in a tweet: “We must put an end to police brutality, racism, and white supremacy. We can’t just say Black lives matter a” we must fight for Black lives.”

There were widespread calls by many activists and Democrats to defund the police — cut police budgets a” and even disband police departments, which also resulted in a backlash as crimes shot up.

Policing is locally governed without a national police service or all-encompassing regulations. Most police departments are under the control of city, town or village officials.

To overcome this, the House of Representatives has passed a bill named for him, the George Floyd Justice in Policing Act, to bring about national police reform, but it has not yet been adopted by the Senate.

The legislation that Vice President Kamala Harris helped draft when she was a senator would prohibit police from using tactics like chokeholds or others like the one used on Floyd, require police to use body cameras and limit personal immunity for police from lawsuits.

Several states and local bodies have already enacted such regulations.

Police brutality was just one aspect of the Black Lives Matter movement.

It also drew attention to the discrimination against African Americans, their poverty, lack of jobs, negative cultural stereotyping including in books and media, and even in the treatment for COVID-19 and the distribution of vaccines.

The poverty rate for African Americans is about two and a half times that for non-Hispanic Whites and Asians, and their mean household income is less than half that of Asians and two-thirds of non-Hispanic Whites, according to Census bureau figures.

Although African Americans are only about 12 per cent of the population they make up about 33 per cent of the of those in prisons, partly as a result of discriminatory policing.

Biden and leaders across business, academia, culture and politics have vowed to correct the historic wrongs and the continuing ones.

Biden has proposed a commission to study reparations for African Americans descended from slaves to make amends for their forebears’ enslavement and its enduring consequences. Congress has a bill for creating the commission.

The Black Lives Matter also had a wider impact in facing up to racism haunting others also. The Asian community felt empowered to stand up vigorously against a wave of violence a” even though many of the perpetrators were themselves non-Whites a” this year unlike ever before.

Floyd emerged as an unlikely hero with portraits in public places and a proposed legislation named for him.

Speaker Nancy Pelosi, for instance, hailed him: “Thank you George Floyd for sacrificing your life for justice.”

“Because of you and because of thousands, millions of people around the world who came out for justice, your name will always be synonymous for justice,” she added.

But he had a questionable past as a convicted criminal with a roster of drug, theft and robbery charges. In the most serious case, he was sentenced to five years for holding up a woman with a gun at her house during a robbery.

His murder took place at a moment of confluence of several factors a” among them the perceptions of Donald Trump’s presidency a” to make it a symbol of the wrongs committed against African Americans.

In 2014 when Biden was the vice president and African American man, Eric Garner, was strangled by a policeman in New York while trying to arrest him over allegations that he was selling single cigarettes.

It was also video-recorded. But the policeman escaped prosecution and there was no national movement or action by Biden on the scale in Floyd’s case. (Agency)