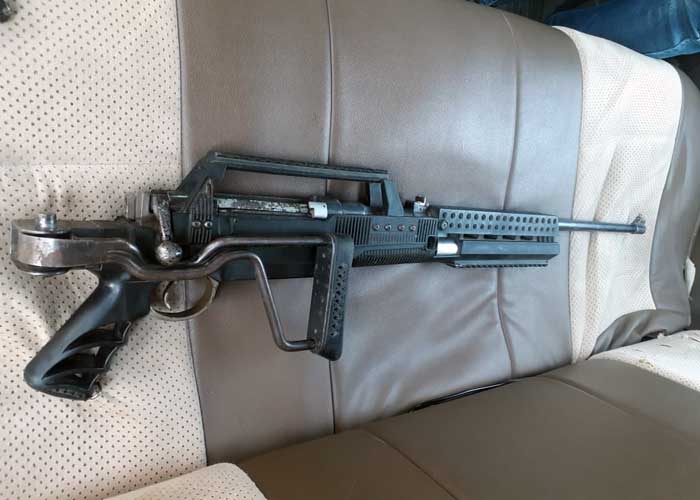 Acting on the Punjab Government’s commitment to eliminate gangsters culture from Punjab, Counter Intelligence wing of Punjab Police on Wednesday morning arrested the infamous gangster Harminder Singh alias Pehlwan alias Mannu Mehmapuria of the Jaggu Bhagwanpuria gang with his aide and along with huge quantity of arms and ammunition, after an encounter in Bhogpur town of Jalandhar district.

The accused Harminder is resident of village Mehmachak and accomplice Honey Kumar of Achli Gate in Batala town of Gurdaspur district and the team of Counter-Intelligence has also seized three pistols, a rifle, 161 live cartridges and a wild spray used by criminals against cops to make them unconscious, from their possession.

A case has been registered against them under sections 307 and 34 of Indian Penal Code and section 25 Arms act in Police Station Bhogpur of Jalandhar.

Addressing a press conference, AIG Counter Intelligence, Jalandhar Mr Harkamalpreet Singh Khakh said Counter-Intelligence Wing received a tip-off that dreaded Gangster Mannu is heading towards Bhogpur area for committing a crime along with aide Honey on two different cars Polo number (PB07-BT-7073) and S-CROSS no. (PB07-BT-3741) and had a huge cache of weapons and ammunition.

He said the following tip-off, a team led by Inspector Pritpal Singh cordoned off the area and asked them to surrender but not paying heed to repeated warnings by cops, the accused opened fire on the police team. Failing to do so, they tried to flee away in the cars but displaying immense courage, the cops overpowered both of them.

AIG further told during preliminary interrogation gangster Mannu revealed that he was a close aide of notorious gangster Jaggu Bhagwanpuria and he was arrested by police in 2015 on a murder charge and was lodged in Jail. During his stay in Amritsar Jail, he shared barrack with Jaggu Bhagwanpuria.

Mr Khakh added that in 2017, Mannu had escaped from police custody with the help of his group members in Batala and committed many murders and bank robberies in various districts of Punjab, as well as incidents of robbing of gold jewellery and snatching vehicles. 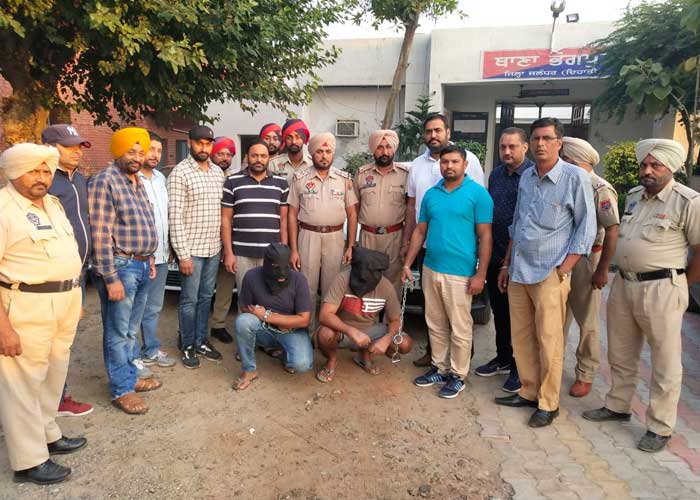 “Moreover following the directions of Jaggu, he had also brutally murdered Jaggu’s rival gangster Gopi Ghanshampuria and after burning his body, he threw the half-burnt body into Beas river,” the Mr Khakh told.

AIG said that, Mannu had accepted to involved in five robberies including two at Hoshiarpur first PNB Bank in Bassi Gulam Hussain worth Rs 10 lakh and second in Axis Bank Kot Fatuhi worth Rs 11.5 lakh, One at Batala in IDBI Bank Jaito Sarja worth Rs 26 lakh and one at Tarn-taran in SBI Bank Jando ke Sarhali worth Rs 4 lakh and gun from the security guard. He was also involved in the big gold loot at Guru Bazar Amritsar which worth crores of rupees.

Mannu was also involved in several cases of vehicle snatching besides assaulting a police party and took away gangster Shubam from police custody, in which a policeman was seriously injured by bullet shots.

AIG said that It has also come to notice that he and his other gang members have now planned to free Jaggu Bhagwanpuria and Bobby Malhotra from police custody but failed as their car met an accident.

During preliminary interrogation of accomplice, Honey revealed his close association with Mannu and Rana Kandowaila. Earlier two cases of theft were also registered against him. He further disclosed that he used to make threatening calls to prominent people of the batala locality by means of foreign numbers and Internet calls by posing himself mannu mehmachak or jaggu bhagwanpur .

AIG further added that both gangsters will be produced before the magistrate and will seek their police remand to carry out further investigation.