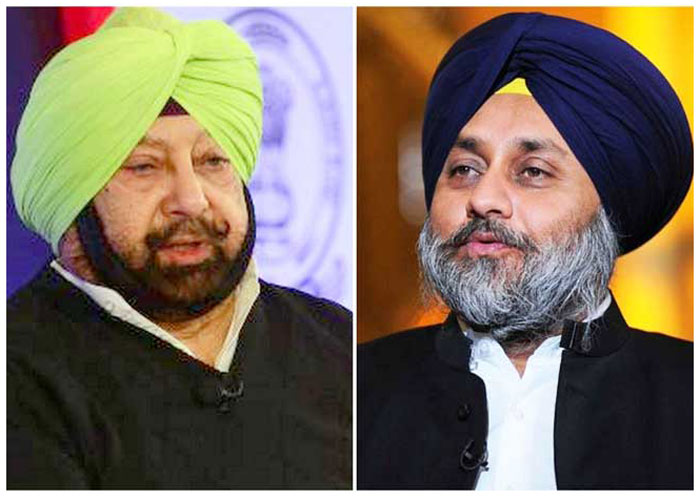 Asking the SAD chief to stop parroting the lines of his political masters in the Bharatiya Janata Party (BJP), Punjab Chief Minister Captain Amarinder Singh on Wednesday dared Sukhbir Badal to quit the ruling coalition at the Centre before resorting to street protests against the state government’s decision on VAT hike on fuel.

Reacting to the protests led by Sukhbir against the VAT hike, with social distancing norms thrown to the winds, Captain Amarinder said instead of putting the lives of Punjab’s people to risk with his politically motivated acts, the Shiromani Akali Dal (SAD) president should pressurise the central government to roll back the shocking manifold increase in petrol and diesel prices since the beginning of Unlock 1.0 in the country.

What made these hikes even more abominable was the fact that they came even as crude prices internationally were showing a remarkable downward trend, he added.

The Chief Minister pointed out that since 2016, the NDA government, in which SAD was a partner, had increased taxes on diesel by 900% and on Petrol by 700%. Prices of petrol and diesel in India are now the highest in the world, he noted.

While all other central taxes have a 42% state share, the taxes on petroleum products have been increased by way of Cess and not excise, thus depriving the states of their share and the entire revenue of over Rs 2 lakh crores from the 22 straight days of hike in June 2020, going into the Centre’s kitty, said Captain Amarinder.

The Chief Minister termed as sheer nonsense Sukhbir’s assertion that his party will press the Centre to reduce fuel prices once Punjab Government does the same. The state government had announced a single hike in VAT for fuel, which came after a series of daily increases in the fuel prices by the Government of India, he pointed out, adding that Punjab’s VAT increase could not be compared with the huge burden imposed by the Centre with its spiralling fuel price.

“What we have earned in revenue through that single VAT hike is peanuts compared with the revenue garnered by the Centre with these fuel price increases in the month of June,” he said, asking Sukhbir to first ask the Union Government to roll back those hikes, which had benefitted no one but them.

On Sukhbir’s claim that he had already written to the Prime Minister seeking reduction in excise duty for petrol and diesel, Captain Amarinder said given the total lack of concern this shows on the part of the Centre to issues raised by one of their own coalition partners, the Akalis should not remain in the alliance for a single day.

Any self-respecting political party, which truly cares for its people, would have walked out of the Central Government a long time ago, but with their shameless greed for power, neither Sukhbir Badal, nor Harsimrat Kaur Badal, who is a minister in the Union Cabinet, would think of doing that, the Chief Minister quipped.

Sukhbir’s desperate attempts to woo back the people of Punjab, who were completely disillusioned with the SAD, will not succeed, said Captain Amarinder, pointing out that there is a stark difference in really caring for the people and pretending to do so.

Had the Akalis truly cared for the people, they would have taken some measures for their welfare during their decade-long rule, he said, adding that even after being voted out of power, the Badals were not doing anything to take the problems of Punjab to the Centre, of which the SAD is a part.

All that Sukhbir and his party have done in the past 5 years is to help the Government of India in creating more problems for the people across the country, the Chief Minister said, citing the CAA legislation, which had the full support of the SAD in Parliament. Far from persuading the central government to take measures for Punjab’s uplift, the Akalis had blatantly backed their anti-farm Ordinances, which were designed to ruin the state, he added.

“Why has the SAD not pressurised the Centre to provide financial relief to Punjab amid the Covid crisis? Why is the Union Government able to get away with inflicting stepmotherly treatment on Punjab without even a murmur of protest from the Akalis, especially Union Minister Harsimrat Badal?”

All this showed how little the Akalis cared about Punjab’s people and how hollow their claims are, said Captain Amarinder, adding that by crying himself hoarse with unsubstantiated allegations of food distribution scam, Sukhbir could not cover up his own failure to do even an iota of good for the state.

The chief minister pointed out that the Congress Working Committee (CWC) in its last meeting had passed a resolution demanding withdrawal of the fuel price hikes imposed by the Center.