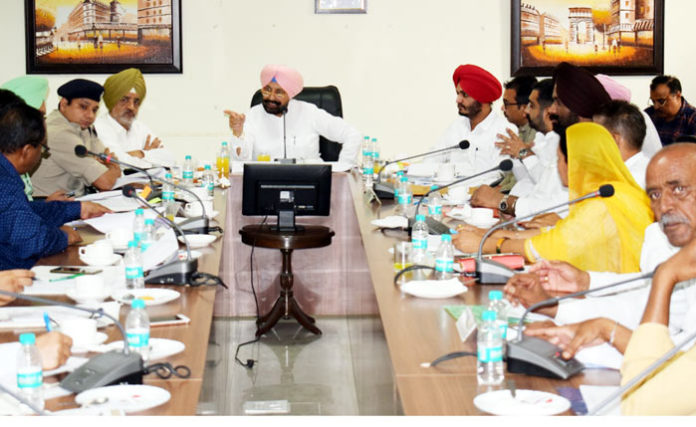 Punjab Health & Family Welfare and Labour Minister Mr. Balbir Singh Sidhu today announced that expansion work of Suhelewal Minor with the cost of Rs13.52 crore will be completed soon in order to strengthen the irrigation system in the district Fazilka. He was presiding over the meeting of the District Grievance Redressal Committee here today.

Giving further details, the Minister said that Rs.6.42 crore would be incurred on construction work, while Rs.7.10 crore will be spent for acquisition of land for the expansion of 11.55 cusec capacity Suhelewala Minor.

He said that after the completion of the project, this minor would irrigate thousand acres of land of the farmers of Suhelewala, Chakk Dhab, Khushal Joyian, Chakk Panjkohi, Chakk Kabarwala, Charkk Ghulam Rasoolwala, Chakk Balocha, Chakk Bahmani Wala villages of Jalalabad block. Mr. Sidhu also directed the officers of the drainage department to complete the cleaning work of drains in Balluana assembly before monsoon.

Minister was apprised about the negligence on the contractor’s level, after which he directed to black list the contractor and assign his work to another one for the time bound completion of cleaning work.

Mr. Sidhu said that Rs.5.05 crore of 5946 poor families have been adjusted in their electricity bills after the restoration of Power Bill Waiver Scheme. He said that 1908 beneficiaries of Fazilka block, 1874 of Jalalabad and 2164 beneficiaries of Abohar block have been given relief of Rs.1.86 crore, 1.49 crore and Rs.1.70 crore respectively. It is pertinent to mention here that during last meeting, Mr. Sidhu had personally directed the officials of PSPCL to submit the detailed report in this regard.

The Minister asked Municipal Council officials to explore the feasibilities for setting up of 12 MLD capacity STP at Fazilka. On this issue, Deputy Commissioner Mr. Manpreet Singh Chhatwal apprised the minister that Fazilka city folks are wasting 12 MLD (Million litters per day) water as sewerage.

He said that 8 MLD capacity old-technologies based STP is presently treating sewerage water of the city and its water is not useful. Deputy Commissioner said that for setting up of ultra-modern technology based STP, approximately Rs.1.2 crore would be spent on setting up of 1 MLD STP. He said that Fazilka city needs 12 MLD capacity Sewerage Treatment Plant to 12 million litters of sewage water.

Sewerage Board, PWD and Mandi Board officials have faced the wrath of the Minster for not completing roads in Abohar after laying of sewerage pipes. Mr. Sidhu was informed that despite of laying of sewer pipes at the main road of DAV College Road, Abohar, road work in not being completed. Further sewerage work has been left between on the old Fazilka road Abohar city.

During the meeting, the Minister also discussed other issues such as construction of new buildings for government offices in sub-division Jalalabad, establishment of Saadi Rasoi in Jalalabad, levelling of Burms along the roads, expansion of grain markets at Fazilka and Jalalabad, progress of work for New Bus Stand Fazilka, potable water, sewage and traffic problem in Abohar, Bishnoi Memorial and setting up of one-stop Center in new district hospital, afforestation to mark the Prakash Purb of Sri Guru Nanak Dev Ji, Drug Menace etc.

Deputy Commissioner apprised the Health Minister that the case for setting up of consumer court in district Fazilka has been sent by the office of the Deputy Commissioner and District Sessions Court to the Food and Civil Supplies Department, Punjab, from where it will be sent to the Union Home Ministry for approval. The Minister said that he will discuss the issue with Food and Civil Supplies Minister and ensure the early establishment of the consumer court.