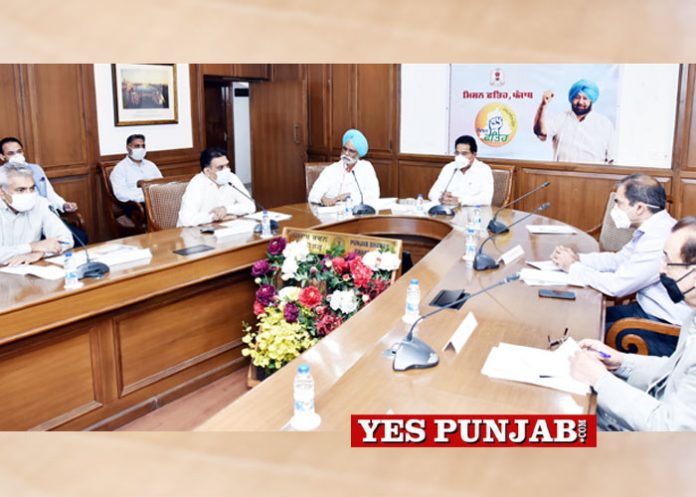 Mr. Soni said that the farmer of Punjab would be more enthusiastic towards crop diversification when he was confident that the crop grown by him would be procured at a reasonable price.

The Cabinet Minister said that an Advisory Committee has been constituted by the Chief Minister to encourage the farmers out of the stereotype crop cycle of wheat and paddy and engage them in cultivation of other profitable crops.

Speaking on the occasion Chairman, Punjab Agro Industries Corporation Mr. Joginder Singh Mann said that the survey conducted by the Food Processing Department under the One District, One Product Scheme in the entire state was a commendable work.

Addressing the meeting Additional Chief Secretary Mr. Anirudh Tewari said that the Punjab Government was doing efforts to create congenial atmosphere and better coordination between the farmers and the food processing industry, which would benefit the both. He said that besides promoting the farmers, we also have to take care of the natural resources such as soil, water and air of the state.

Mr. Manjit Singh Brar, Director Food Processing apprised the members of the committee about the various schemes being run by the government for food processing and also briefed them in detail about the One District One Product Scheme.

On the occasion committee member Bhavdeep Sardana suggested that a standard like ISI should be set up for all the food brands in the state, which would give world-wide acknowledgement to the quality of the product.

Demanding maximum publicity about the land bank, the committee member said that every industry needs water in abundance; hence the policy on water use in industries should be formulated as soon as possible. It was also proposed to set up a quality control body of the state of Punjab, which would certify the quality of all types of food processing products manufactured in the state of Punjab.

Committee member Dr. A.R. Sharma said that the demand for processed food increased due to COVID-19 pandemic these days, we should encourage investment in this sector.

Committee member Mr. Ajay Kumar said that industries were not getting incentives and the government needed to pay more attention in this direction. Committee Member Narendra Goyal said that farmers would adopt crop diversification only when they were confident that the government would provide more incentives.

Mr. Vijay Garg demanded that in the districts where there were no food parks or focal points, small food parks must be set up so that the aspiring investors could get land.

Committee Member Mr. Piara Lal Seth demanded to set up a R&D center in Amritsar and to run a cold store at Amritsar Airport and to strengthen the cooperative societies in the state of Punjab on the pattern of Gujarat so that small scale industries could unite.

Agreeing with the views of the committee members, Mr. Soni said that he would soon hold a meeting with the Chief Minister to implement the suggestions presented here.

Prominent amongst others who were present in the meeting included Director Expenditure Mr. Abhinav Trikha and officials of Agriculture Department, Invest Punjab, Industries Department and Animal Husbandry Department.