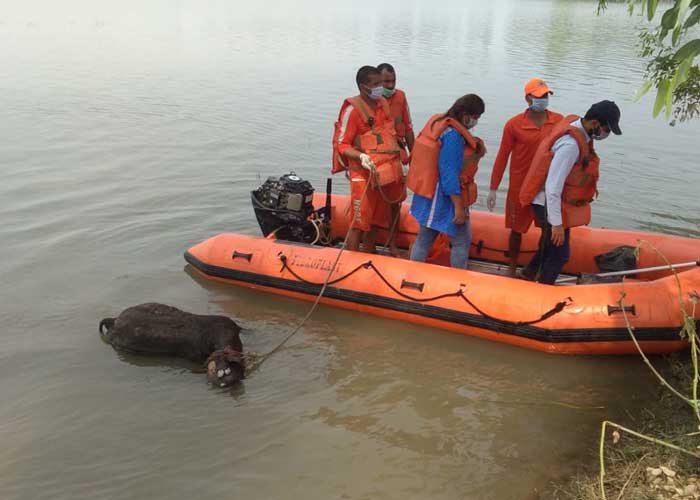 The floods in Punjab have taken a heavy toll on the livestock with the fall of 445 large animals/cattle, 90 pigs, 38 goats and 29200 poultry birds, informed an official Spokesman of Government of Punjab.

On the directions of Chief Minister Punjab, the efforts are afoot to extend compensation for the loss at the earliest, said the spokesman adding that Rs.1.96 crore would be disbursed at the rate of Rs.30,000/- per large animal, Rs.3000/- per goat/pig and Rs.200 per poultry bird.

Besides, the staff of Animal Husbandry is all on toes, extending medical facilities to the animals. 170 teams of Vets have been constituted and 157 relief camps established. As many as 14210 animals have been treated and 13765 have been vaccinated till date against Haemorrhagic Septicaemia (HS), a contagious bacterial disease, said he and an approximate expenditure of Rs. 3.10 crore has been incurred on medicine and vaccination.

The experts are also sensitizing the people about the signs of other diseases and have directed them to inform the veterinary doctors in order to commence treatment at the earliest. Sufficient stock of vet medicines is available with the department, said he.

The department has also initiated a drive to provide green fodder/silage for animals as a part of which silage for animals has been provided door to door in the flood-affected villages via tractors and trolleys.

Nearly an expenditure of Rs.18 crore is required to be incurred on the same taking the total financial implications of various activities of the department to Rs. 23.16 crore. He further said that with the flood-water having receded in the affected villages, the sick-animals are being taken to the nearby vet hospitals.