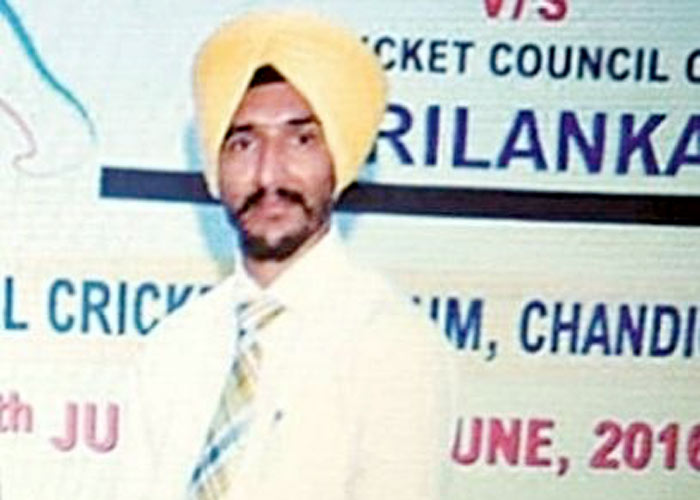 The Punjab police on Monday arrested Ravinder Dandiwal, who is allegedly involved in the international tennis match-fixing scandal, alongwith two others from Mohali for recently hosting a fake Sri Lankan T20 league near Chandigarh.

Dandiwal, who is on the radar of the Board of Control for Cricket in India, is facing charges of hosting a cricket match of the Uva T20 league on June 29 that was aired in Sri Lanka through YouTube.

The BCCI team will be reaching Mohali on Tuesday and will be sharing the details with the police, confirmed BCCI’s Anti-Corruption Unit (ACU) head Ajit Singh.

“Yes, he (Dandiwal) has been arrested and we are sending a team tomorrow there. We will gather whatever information we can, we will also share the information available with us to the police,” Singh told IANS.

“Whatever is useful to the police, we are ready to hand it over,” he added

The cricket match, comprising small-time players largely of Punjab, Haryana and Chandigarh, was played at a cricket academy in Sawara village, some 15 km from the state capital.

The players were wearing face masks, pretending to prevent the spread of the coronavirus, and were donning numbered jerseys.

“Ravinder Dandiwal has been arrested and we have been probing his role in this racket,” Mohali Senior Superintendent of Police Kuldeep Singh Chahal told the media.

Earlier, the police had arrested Raju and Pankaj, who had booked the cricket ground of the Strokers Cricket Association for Rs 33,000 from June 29 to July 5 and had formed four teams for the league.

In a press statement, the SSP further said that a case in this regard was registered on July 2 under sections 420, 120B and other sections of the Indian Penal Code related to betting at Sadar Police Station in Kharar against Pankaj and others.

Pankaj, with his accomplice named Goldy, had booked the ground and formed four teams for the tournament which they were planning to hold from June 29 to July 5.

“The said league was held in Sawara village but was shown as being held in Sri Lanka and relayed on various social media apps such as fancode APP, Diamond, Sky, Lotus, Tenbet, Spin, Punjab Exchange, for the purpose of earning huge amounts of money through betting,” the police statement read.

The Punjab police also said that further investigation in the case led to the arrest of Dandiwal. “It was also revealed that he organised such fraudulent tournaments for many years in Mohali, Amritsar and Bhopal after forming a club named Cricket Club of India (CCI) in 2009. He also had links with various other big fishes in the world of betting.”

However, the press note didn’t mention the sections under which Dandiwal has been arrested.

Meanwhile, official sources said the police have sent a notice to YouTube for airing the match.

“All the players who were hired for the cricket match was small-time players and they were offered Rs 5,000 to Rs 10,000 for playing the match. The role of some Ranji players in hosting the match is also under investigation,” a senior police official told IANS.

He said the players with dark tan skins were selected for the match so that they looked alike Sri Lankans.

Two cameras were installed in such a way they focused on the back of the players in order to conceal their faces and were typically taking long shots.

“When the match was airing, suddenly a camera captured some farmers working in a rice field. That raised a suspicion that the match is not played in a stadium,” said the police official, who is part of the investigation.

The Sri Lankan cricket board had already denied their involvement in the tournament.

“Sri Lanka Cricket wishes to announce that neither SLC nor its affiliates have any knowledge or any involvement with a fantasy tournament staged by an undisclosed party under the name and title of ‘Uva Premier League T20′, despite some media reports published by Indian websites claiming that such a tournament is being played in Sri Lanka from 29th June 2020 onwards,” SLC had said in a statement.

It should be noted that Dandiwal is known in the Chandigarh cricket circuit, and has been reportedly organising private leagues not recognised by the BCCI.

The BCCI ACU chief had earlier told IANS that some two-three years back, Dandiwal wanted to hold a league in India which they were able to disrupt.

“He is focussed more on outside the country than in India,” Singh had said.

“He was associated with the Afghanistan Premier League two years ago. But then again, that’s not under our purview. He was also reportedly involved in some league in Nepal some two-three years ago. His name has come up in trying to organise leagues somewhere sometime in Bangkok as well.

“But, even though he is outside the purview of BCCI ACU, he is a corrupt. So, we have to keep an eye if he is trying to contact anyone of our players, which thankfully hasn’t happened.

“Nothing can be done in India as nothing on-record has happened here. It’s somewhere in Australia or Egypt, so it doesn’t invoke any jurisdiction of Indian police,” he had pointed.  (Agency)