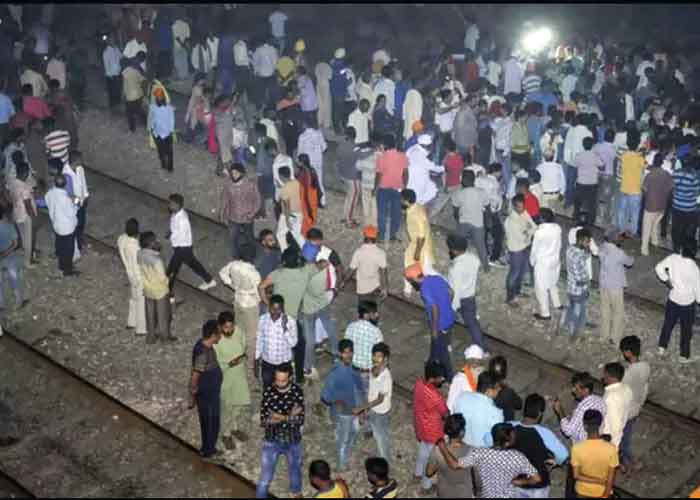 Hundreds of people comprising the next of kin of the victims of the train tragedy on Dussehra last year, held a demonstration on Tuesday here over alleged failure of the local administration to book those who were responsible for the disaster that claimed 61 lives.

They also raised slogans against Navjot Singh Sidhu, their legislator and former Minister, for not keeping the promises made by him after the accident.

Sidhu and his wife had promised to provide government jobs to the kin of each victim, to adopt children who had lost their earning parents and help widows meet life expenses.

“We were told by Sidhu and his wife at the time of the accident that they will provide jobs to our families,” a protestor, Sunil Kumar told the media.

Carrying the photo of his brother who died in the accident, he said no promise made by the Sidhu couple has been fulfilled till date.

“For the past many days, we have been visiting his residence and we were told every time that Sidhu is out of town,” he added.

“We are asking the state government to hand over the probe to the CBI so that who were responsible for the accident should be brought to book,” another protestor Sangeeta Rani added.

At least 61 people were killed after a speeding train sliced through revellers watching a Ravana effigy go up in flames, near Joda Phatak in Amritsar on October 19, 2018.

Sidhu and his wife has gone into hibernation since he quit the government in July, said a 20-year-old college student, who lost his father in the accident.

Ramesh Kumar, who lost his son in the accident, said: “I got the compensation from the government. But Sidhu and his wife promised me to provide job for my second son as we lost the lone breadwinner.”

A candlelight procession led by former Akali Dal minister Bikram Majithia was carried out here on Monday evening which saw the participation of the victims’ families.

Majithia said three inquiries into the incident were undertaken by the government, but no action has been taken yet.

He said the investigation conducted by the Jalandhar Divisional Commissioner was aimed at saving the Congressmen who were responsible for the incident.

He said a close aide of the Sidhu couple, Mithu Madan, the organiser of Dussehra festival, was shielded by making the probes just a cover-up exercise.

Sidhu, who had been at loggerheads with Chief Minister Captain Amarinder Singh, formally resigned on July 14.

Since then he made public appearance only once and visited his constituency Amritsar (East) to oversee developmental projects briefly.  (Agency)