Home National Farmers can’t be tired or fooled, they are much smarter than the... 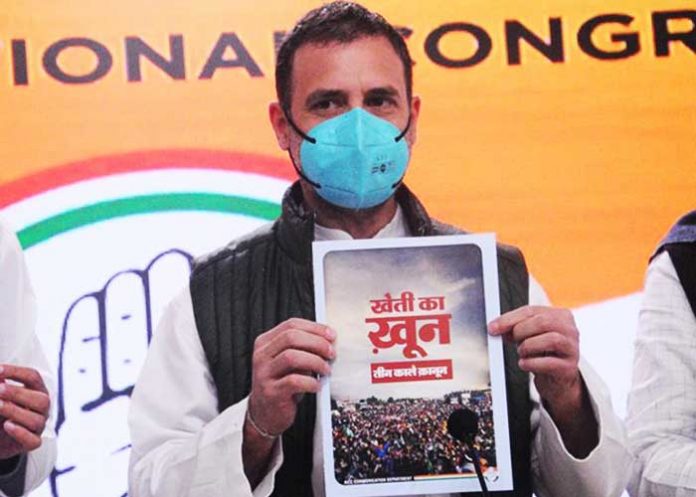 New Delhi, Jan 19, 2021-
Former Congress chief Rahul Gandhi on Tuesday hit out at the Centre over the farmers’ agitation, saying that the “image” of India built by the Congress is being “destroyed” by Prime Minister Narendra Modi.

Commenting on the farmers’ protests at several borders of the national capital for the last 54 days over the three farm laws, he said that “a tragedy is unfolding” and the only solution to end the deadlock is to repeal the three farm laws.

Addressing a press conference here at the party headquarters, Rahul Gandhi said, “India used to be a pre-eminent economy in the world. Now we are a laughing stock. We are unable to provide jobs to the youth. Farmers are protesting outside in the cold. I don’t know why Modiji thinks that it is something to be proud of.”

“This is something to be ashamed of. The whole world is looking and asking why lakhs of farmers are sitting outside Delhi. So, Modi is destroying the image of India that Congress and Mahatma Gandhi built slowly and steadily,” he said.

“That is the reality,” he said, adding that the only solution to this is to repeal the three farm laws.

“But farmers cannot be tired or fooled. They are much smarter than the Prime Minister. Only solution to end the protests is to repeal the three farm laws,” he said.

He also accused the government of “destroying” Indian agriculture by enacting the three farm laws.

He further said that there is a tragedy unfolding today in the country, and the government wants to ignore the issue and mislead the country. “I am not going to speak about farmers alone as it is only part of the tragedy. It’s also important for youngsters. This is not about the present but about your future,” he said.

“The rice and wheat that you (middle class) buy comes at the rate you purchase because of APMC and the agricultural system. This is not just an assault on farmers but on the middle class and on every single youngster in the country, who is not able to get a job,” he said.

He said, “What we have seen in industry after industry, when it comes to the airports, telecom, power, retail, across the board, what we are watching is the development of massive monopolies.”

He alleged that “three-four-five people are owning this country, and they are owning it as a small group of people who are close to the Prime Minister and have media support.”

“And now we have seen that the last bastion of agriculture that was not touched by industries is also going away,” he said.

He said that now three or four people will own the whole system and the farmers will not get their prices and the middle class will be hurt by the prices.

The Congress leader said that the farmers of Punjab and Haryana are fighting on behalf of 65 crore farmers of the country.

“They are the patriots of the country, who are protecting livelihood of 65 crore people. I support them, they are fighting for us,” Rahul Gandhi said.

To a question about China’s intrusion, Rahul Gandhi said, “China is noticing the weakness of India. China has a strategic vision as it wants to shape the entire world. China has tested India twice. If India won’t create a strategy against China, it will take benefit of that and then no one would be able to stop the damage.”

He said that the job of safeguarding the country is not being done properly.

“China is testing India and it wants to dominate. I am raising red flags, you can’t manage China with event management,” he said.

He added that whoever speaks against the government is described as an anti-national or criminal.

“We are saying this because we are seeing the problems. If we speak about China we are enemies. When we are giving warning signals, we are enemies. Even if the farmers’ protest is sorted out, then its result will come from somewhere else like from youth or someone else.

“Their approach is wrong, they don’t want to learn and accept. They only want to speak, it is the training by the RSS, they are top grade in this,” he added. (Agency)