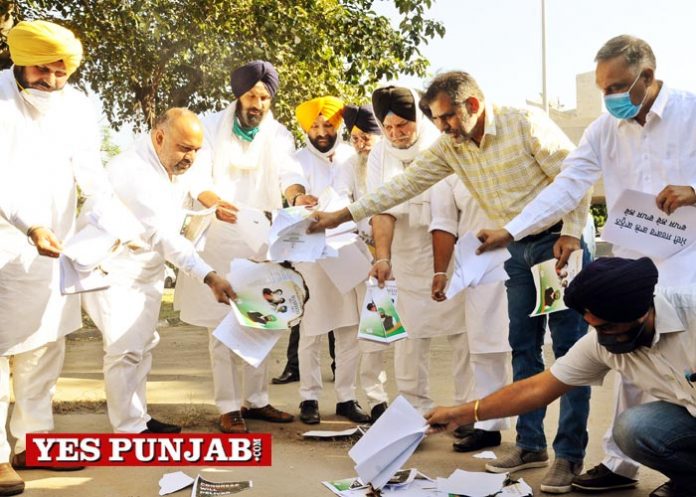 The Shiromani Akali Dal (SAD) today said the Congress government had taken up the farm Bills after farmer’ ultimatum but lot more was needed to secure the future of Punjab farmers even as it announced its legislators were ready to resign enmass to ensure the centre gave them their due.

“The fight to secure justice for the ‘kisan’, ‘khet mazdoor’ and ‘arhatiyas’ as well as three crore Punjabis has just started.

Now chief minister Capt Amarinder Singh must give a categorical assurance that the State government will purchase all farmer crops including wheat, paddy, cotton and maize at minimum support price (msp) if the centre defaults on the same”, the SAD legislature party said while addressing a press conference here. It also noted that it was unfortunate that the chief minister refused to allay the fears of farmers by giving a concrete assurance in this regard.

Addressing the conference, SAD legislature party leader Sharanjit Singh Dhillon and Bikram Singh Majithia said it was now clear that the Congress government, which was running away from calling a special session, was forced to do so due to the ultimatum served on it by farmers and khet mazdoor.

“The truth is that our farmer brothers made chief minister Capt Amarinder Singh relent from his recent statement at Khatkar Kalan where he asserted that there was no point in calling a special session to negate the Agri black laws”.

Explaining the issue, Mr Bikram Majithia said even as all parties presented a united stand in the fight against the centre, it was unfortunate that the Congress government did not share the proposed Bills with all the stake holders, including farmers and legislators, before the House was convened.

He said it was also unfortunate that the chief minister has thrown the ball in the centre’s court by passing Bills concerning Trade and Commerce which were in the concurrant list and required Presidential assent.

“It would have been better if the government had passed a Bill under the Agriculture head by moving to make the entire State a single principle market yard to negate the implementation of the Bills in Punjab. Any such Bill would have received both the Governor’s as well as the Presidential nod being a State subject. A huge opportunity has been missed”.

Mr Majithia said the SAD had also requested in the assembly that the Acts of 2006 and 2017 which had weakened the State Agricultural Markets Act should be repealed. He said this was also in line with the sentiments of Punjabis and it was baffling why the Punjab government refused to rise to the occasion and take a firm stand to protect APMC markets.

He said the assembly should have also taken up his suggestion to pass a resolution condemning any attempts to label agitating farmers as ‘hooligans’ and making it clear that the State will not brook any threat or insult to the ‘annadaata’.

Mr Majithia said the SAD had also requested that the Congress government take this opportunity and announce fulfillment of all the promises made to the farmers. He said this included fulfillment of the complete loan waiver promise, giving a government job and Rs 10 lakh compensation to all farm suicide victim families, one government job to all farmer families holding less than five acres land and Rs 20,000 per acre crop damage compensation.

He said the government should also offer a government job and Rs ten lakh compensation to all ten farmers who had lost their lives during the ongoing farmer agitation.