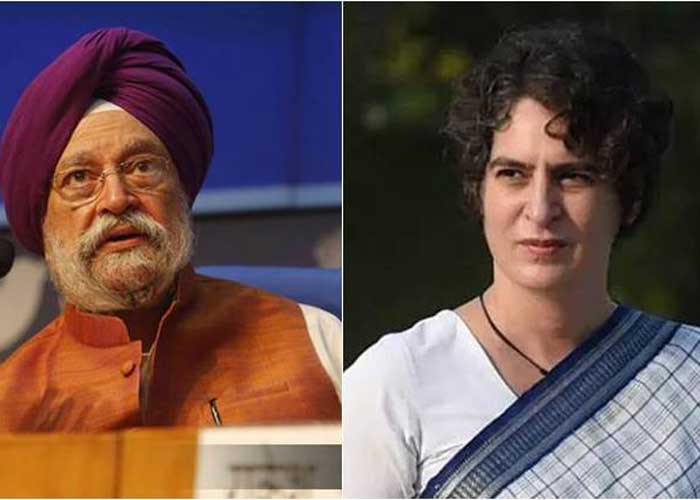 Congress General Secretary Priyanka Gandhi Vadra on Tuesday refuted the claims of Union Minister Hardeep Singh Puri that she sought extension for stay at the government bungalow in Delhi saying “facts don’t change as I have made no such request”.

She also asserted that she will vacate the house by August 1.

Her remarks came after Puri, who is Union Minister for Housing and Urban Affairs in a tweet said, “Facts speak for themselves! A powerful Congress leader with much clout in the Party called me on 4 July 2020 at 12.05 p.m. to request that 35, Lodhi Estate be allotted to another Congress MP so that Priyanka Vadra can stay on. Let’s not sensationalise everything please.”

Responding to Puri’s charge, Priyanka Gandhi took to Twitter and said, “If someone called you Mr Puri, I thank them for their concern, and thank you for your consideration as well but it still does not change the facts: I have made no such request, and I am making no such request.”

“As I said, I will be vacating the house by the 1st of August as required in the eviction letter,” she said in a series of tweets.

Her remarks came after an IANS story which claimed that in a remarkably statesman-like move, Prime Minister Narendra Modi has agreed to a request to allow Priyanka Gandhi to retain the 35, Lodhi Estate Bungalow for some time.

On July 1, the government asked Priyanka Gandhi, daughter of party interim chief Sonia Gandhi, to vacate her government accommodation within a month as she is no longer in the list of Special Protection Group (SPG). Priyanka Gandhi was allotted bungalow No 35 in south Delhi’s Lodhi Estate on February 21, 1997 on security grounds as a SPG protectee.

According to a notice issued by the Union Housing and Urban Affairs Ministry, she has to vacate the bungalow by August 1, failing which it will attract damage charges/penal rent as per rules.  (Agency)