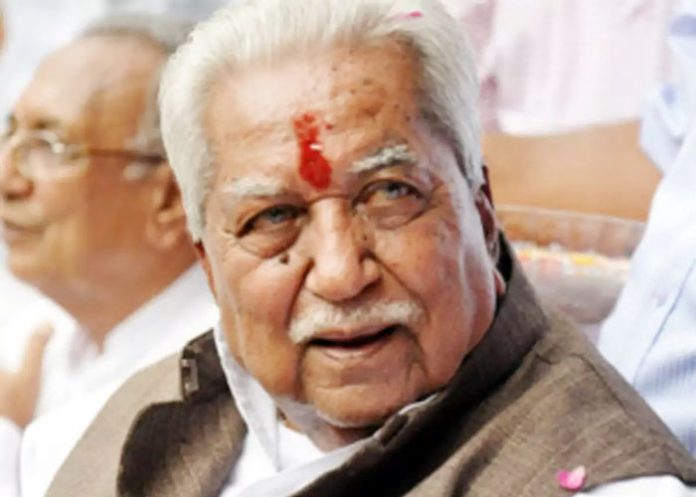 Gandhinagar, Oct 29, 2020 –
Former Gujarat Chief Minister and veteran Bharatiya Janata Party (BJP) leader Keshubhai Patel passed away on Thursday morning at the age of 92 years. He was undergoing treatment at a hospital in Ahmedabad.

The BJP leader was hospitalised after he complained of difficulty in breathing on Thursday morning. He breathed his last during treatment.

Sources said that Patel was tested Covid-19 positive last month. The BJP leader was asymptomatic at the time of being diagnosed with Covid-19 disease.

Patel, who had a good relationship with Modi, floated a breakaway outfit in 2012 called the Gujarat Parivartan Party. The party merged with the BJP in 2014.

Gujarat Chief Minister Vijay Rupani condoled the death of Keshubhai and described him as “Respected Keshubhai Patel, our elder who raised this BJP banyan tree from Jana Sangh in Gujarat, who sacrificed his entire life for the work of the nation, who did a great job for the farmers as a farmer’s son”.

“I offer my tributes to the departed leader. In this hour of grief, I express my heartfelt condolences to his family and well-wishers. Om Shanti,” Singh said in a series of tweets.

Singh said that Keshubhai Patel will always be remembered for his unwavering commitment to serve the people.

“Former Chief Minister of Gujarat, Keshu Bhai was a political stalwart who played a significant role in strengthening the BJP in the state. Deeply pained by his demise today.”   (Agency)