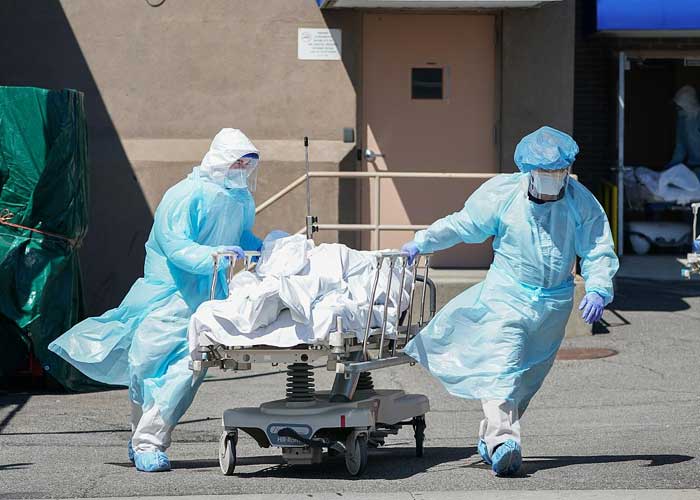 Brussels, April 10, 2021-
For Danica Angela Marcos, the weirdest yet saddest scenario was to watch her grandfather’s funeral live on Zoom, seeing her cousins crying on the screen but not able to give them a hug because of the lockdown.

“It’s not like we can do (it) all over again when the pandemic is over … I cannot re-attend my grandpa’s funeral,” mumbled the black-hair Londoner in her 20s, rolling eyes to hold back tears, whose grandfather passed away in California, the United States, towards the end of last year.

Many Europeans, like Marcos, have undergone similar human sorrows and pains, as the nightmare of Covid-19, which has shrouded the continent since more than one year ago, is still hovering around, Xinhua news agecy reported on Friday.

On Friday, the Copenhagen-based World Health Organization (WHO) Europe Office announced that the European region has recorded more than 1 million Covid-19-related deaths.

Since breaking out in late 2019, Covid-19 has been causing infections and deaths at an accelerated pace across Europe. One after another, governments of different countries were woken up to the danger, announcing partial or full lockdowns, and even night curfews, moves rarely seen since the end of World War II.

Schools closed, flights grounded, hairdressers and restaurants shutdown, only grocery and shops selling essential goods, in most countries, were among the few that were allowed to open, while the customers were required to wear masks and keep social distance of more than one meter.

Before the reopening of schools, online courses were offered to students who were forced to stay home during the pandemic in many European countries. Many schools sent assignments to parents via e-mail or other digital tools, or shared free online resources.

However, not all students are self-disciplined. In France, about 5 to 8 per cent of students were “lost,” or unreachable by their teachers, estimated the French Ministry of Education in April 2020.

“This virus has imposed limitations on all of us. I have practically no social life and can’t hug the people I love. My personal life has turned completely around. Few things remain from my previous life. And as a person, I feel exhausted, restless, and uncertain,” Abigail Mora Sanz, a psychotherapist in Spain, told Xinhua.

Besides the continent’s aging population and the overwhelmed healthcare systems, some experts attributed the bleakness in Europe to frequent policy changes, which have swung between lockdowns and relaxations for several rounds.

One of the major challenges for European countries is “the temptation of too fast reopening, which is politically popular but can cause another wave of epidemics before proper vaccination,” said Miklos Hargitai, an editorialist of Hungary’s daily Nepszava.

“In addition, Europe has not adopted the practice of the most successful countries in curbing the virus,” Hargitai told Xinhua.

Another factor behind Europe’s current COVID-19 resurgence is the alarming and explosive spread of the highly contagious virus variants, which increases the risk of hospitalization.

The slow rollout of vaccination may also prolong the pandemic. According to WHO Europe Office, only 10 percent of the region’s total population has received at least one vaccine dose and 4 percent has received both, as of April 1.

“Vaccines present our best way out of this pandemic… However, the rollout of these vaccines is unacceptably slow,” said Dr. Hans Henri P. Kluge, the WHO’s regional director for Europe.

On April 1, Kluge called upon governments in the region to “scale up both vaccine production and vaccination.”

German photographer Ulrich Hufnagel was diagnosed with COVID-19 last September, with so-called mild case symptoms and was quarantined for more than 20 days.

“It is very annoying that some people in Germany and Europe do not take the virus seriously. My hope now rests on quick vaccination. I think this is the only possibility to get our normal life back,” Hufnagel said.

Due to what appears to be an acute shortage of vaccine doses earlier this year, tensions once remained high between the European Union, Britain, and some central-eastern European countries like the Czech Republic, Hungary, and Austria.

The connection between blood clots and the AstraZeneca COVID-19 vaccine, which has been purchased and administrated in large amounts by many European countries, also raised concern among people.

The European Medicines Agency confirmed on Wednesday that the occurrence of blood clots with low blood platelets are strongly associated with the AstraZeneca vaccine.

Faced with such dire challenges, some governments in the region have started to look for the alternatives. Serbia and Hungary have granted permission for the use of a COVID-19 vaccine developed by China. Some other countries, like Poland and the Czech Republic, also voiced interest in Chinese-made vaccines.

“We fully support the Chinese idea of establishing a global anti-pandemic community of cooperation and help,” said Sylwester Szafarz, former consul general of Poland in the Chinese city of Shanghai.

However, vaccines themselves are not a panacea for the pandemic, until people are inoculated in huge numbers, WHO Europe Office warned, noting that it can give a false sense of security, inducing the public to stop wearing masks and taking other precautions.

Besides measures to accelerate the vaccination, several governments and health care experts deem social restrictions a key tool for containing the disease and reducing deaths.

“Now is not the time to relax measures. We can’t afford not to heed the danger. We have all made sacrifices, but we cannot let exhaustion win. We must keep reining in the virus,” Kluge said.

With their life being changed amid the pandemic, many people in Europe have been eventually getting used to wearing face masks outside, working and studying from home.

To some people, the future seems less gloomy and confidence is growing.

Once worried that the lockdowns could totally ruin his business, Remi Boute, director of a bookstore in southeast France’s Saint-Etienne, feels relieved as his shop reopens.

“When the stores reopened, we had the satisfaction of seeing people tell us they were happy to see our stores open. They returned in large numbers,” he said.

“We faced something that we’d never seen and so what we tried to do was to understand it, to better treat our patients and save or try to solve the problem in the most cases we could,” said Pere Domingo, senior infectious disease consultant and coordinator of COVID-19 at Barcelona’s Sant Pau Hospital.

“This intellectual component … has been something that has stimulated us, and helped us overcome all these negative feelings that at one time or another we have all had,” said the Spanish professor, who has been devoted to the research of infectious diseases since 1989. (Agency)