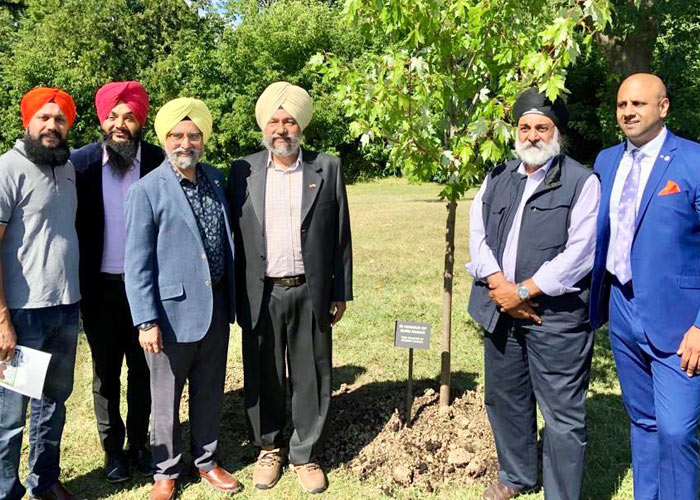 A silver pine tree was planted symbolizing the connection with Canada and the historic site where first immigrants were welcomed. Toronto Region and Conservation Authority worked with EcoSikh Canada team to finalize the strategic site where this tree has been planted.

A Sikh prayer was recited by the local gurdwara president before the plantation and this marked the first tree in Canadian history being planted in Guru Nanak’s honor.

“Sikhs believe in peace, unity and dedicated servitude to all humanity. Canada is our beautiful home with rich cultural and bio diversity. With such beauty, comes great responsibility for our environment. It was truly and honour to see the overwhelming community support this weekend and we are planning to make a big difference with our strong partnerships and community engagement 55,000 tree planting goal by 2021,” said, Roop Singh Sidhu, President of EcoSikh Canada. 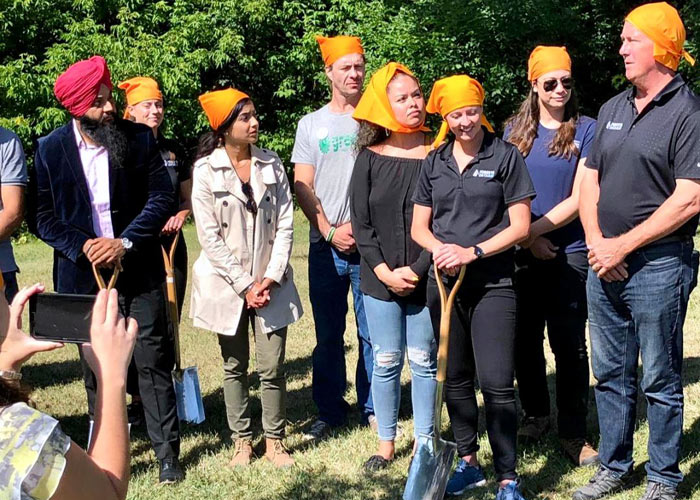 A partnership between two organizations were announced and EcoSikh Canada Chair Roop Singh Sidhu announced that the Sikh community will plant 55,000 trees in Canada in celebrating Guru Nanak’s 550th birthday. EcoSikh Canada has already commitment from a number of Gurdwaras in the Toronto area to plant 550 trees in various locations.

Dr. Rajwant Singh, EcoSikh Global President especially flew from Washington to join this important occasion and said, “As followers of Guru Nanak, who was the first environmentalist, we need to honor his legacy and his birthday celebration by planting 1 million trees.

It has become critical that we increase green cover all over the world especially the havoc caused by the burning of the Amazon rain forest in Brazil.” He further added, “EcoSikh is committed to plant 1 million trees in honor of 550th anniversary and we appeal to all those who love Guru Nanak to join in this noble drive.”

EcoSikh Canada’s next tree plantation event is in partnership with Credit Valley Conservation at Courtney Park Athletic Fields in Mississauga. It is planning to plant 200 trees in this drive.

EcoSikh’s global organization was established in 2009 and it has engaged the worldwide Sikh community on climate change issues. EcoSikh has planted 32 mini forests in Punjab in the recent months to combat climate change. The organization was derived from meetings with Prince Philip’s Alliance of Region and Conservation (ARC) and the United Nations’ Development Programme (UDNP).

EcoSikh Canada is appealing the community to support its tree plantation drive in the country and asking people to donate at ecosikh.ca. EcoSikh Canada is a not-for-profit, charitable organization created to support awareness through partnership and active participation in the reversal of climate change.