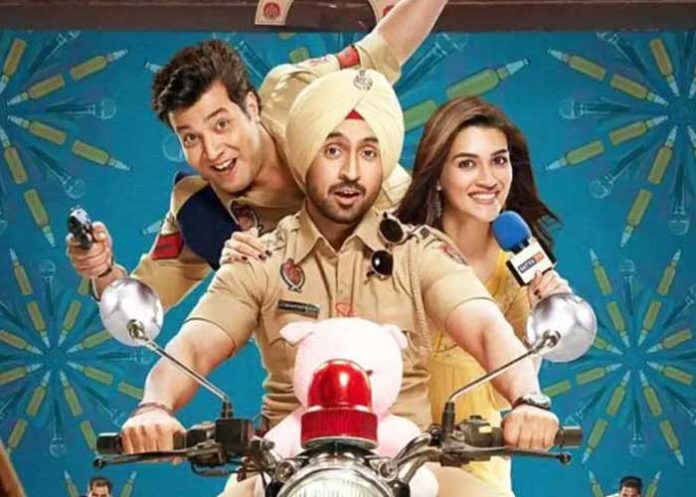 The makers of “Arjun Patiala” have obviously thrown caution to the wind and indulged in a care-a-damn attitude. They have given absolute hoots to the critics — a fact that is blatantly spelt out by the end of the film.

This screwball comedy, designed as a buddy-cop film, is a huge letdown. You would enjoy the humour if it was intelligently mounted. Unfortunately with a perfunctorily-designed plot, flippant graphics and absurd gags, the end result is a yawn.

The film begins with a struggling director coaxing a prospective Producer (Pankaj Tripathi) to back his film. After ensuring the requisite elements for a hit film — one of which is the presence of Sunny Leone — the producer greenlights the project without even listening to the script. This, despite the fact that the director desperately wants the producer to hear his story.

The story is about Arjun Patiala, a judo champion who hero-worships IPS Officer Amarjeet Singh Gill. Following his advice, and after winning a judo championship, Arjun lands a job as a sub-inspector under the sports quota.

He is posted as the station house officer in Ferozepur, where he is assisted by “munshi” (head constable) Onida Singh. Their aim is to make Ferozepur a crime-free district.

Sunny Leone is woven into the narrative when she seeks Arjun’s assistance, and he comes forward to help her. Then, all of a sudden, the director informs his producer; “Yahaan Sir, absolutely for no reason, we break into an item number.” However, the item song lacks gusto to breathe life into the narrative.

In between wiping off crime from the district, Arjun finds time to romance Ritu Randhawa (Kriti Sanon), a journalist. How he introduces her to his parents and cements his relationship adds to the jamboree. Every track in the kooky script, which includes contrasting tones that circle around sentimental and playful performances, is flat.

The music is immensely forgettable, and the song ‘Sanson ki zaroorat hai jaise” is intermittently used throughout the film.

Overall, this film had the potential to be a good comic caper. Trite humour, and a hackneyed and lazily-crafted plot, spells doom for “Arjun Patiala”.  (Agency)