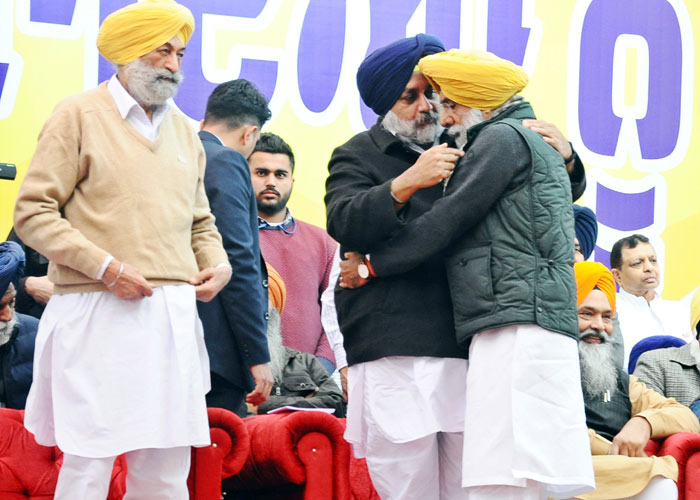 Shiromani Akali Dal (SAD) President Sukhbir Singh Badal today said those like mp Sukhdev Singh Dhindsa who were backstabbing the mother party which had given them so much honour could not be referred to as Taksalis as they were trying to weaken the ‘panth’.

Addressing a massive congregation here while paying rich tributes to the forty ‘Muktas’ who sacrificed themselves for the ‘kaum’, the SAD President said “a Taksali is someone who is loyal to his party and never disobeys it.

S Sukhdev Singh Dhindsa lost all elections but one in the last thirty five years but he was consistently accommodated by S Parkash Singh Badal by being made Chairman of a State Board or given a Rajya Sabha ticket. This happened even when he lost by a margin of three lakh votes. The SAD and Sardar Badal were not bad for him then”.

Stating that Mr Dhindsa was questioning the contribution of SAD towards the panth and Punjab by stating that he wanted to free the SAD of the Badals’, the SAD President said “Sardar Badal is known for his service to the people.

Badal Sahab always led from the front, he was the first to be jailed and the last to come out”. Stating that in public service it was the people who decided the fate of their leaders, Mr Sukhbir Badal said “the people have reposed their faith in Badal Sahab on numerous occasions and he has been winning elections since 1965 and is also a five time chief minister. In direct contrast those who are not liked by the people face defeat in repeated elections”.

Speaking about former minister Parminder Dhindsa, the SAD President said the former was like a younger brother to him. “I have always tried to accommodate him. He came to me to change his constituency. I agreed. S Sukhdev Dhindsa requested for a ticket for his bureaucrat son-in-law from Mohali. I agreed to that too. It pains me that they are calling me a dictator now. They did not earlier”.

Speaking about his own conduct, Mr Badal said “S Sukhdev Dhindsa is my elder. I touch his feet. I have played in his lap. I also know as a fact from my 35 years in politics that Badal Sahab never said no to Mr Dhindsa. Despite this Mr Dhindsa has now made it his aim to take on the Badal family. I want to tell him that we won’t win or lose as per your will but by the will of the people”.

Talking about the attempt to weaken Sikh institutions, Mr Badal said “our opponents now talk about freeing the SGPC from the SAD. I want to tell them that the SAD is a democratically elected body. The district administration makes the votes which are polled under government supervision. Those opposing us always try their luck in the SGPC elections and are consistently rejected by the sangat”.

Speaking about the burning issues of Punjab, Mr Badal said the people had been burdened with unbearable tariff hikes which had affected each and every person and was making the industry unviable. He said instead of giving relief to the people, the Congress government had burdened them with additional cost of Rs 22,000 crore.

He said the Congress government had deliberately put up a weak defense in the Supreme Court on the issue of coal washing charges which had given a benefit of Rs 1400 crore to private plants. He said similarly the government did not contest an Rs 1602 crore award given to a coal mine for two and half years due to which the high court had now ruled against it. “We want an independent inquiry into both these scams”, he added.

The SAD President accused chief minister Capt Amarinder Singh of releasing fake advertisements saying the government had created ten lakh jobs. Stating that rule of the jungle was prevalent during Congress rule, Mr Badal said Congress ministers and legislators were using gangsters to terrorist their political opponents as well as the common man. Mr Badal also pointed out that no development was taking place in the State.

Speaking on the occasion, mp and senior leader Balwinder Singh Bhundur said the contribution of S Parkash Singh Badal towards Punjab and Punjabis was unparalleled. He said the SAD Patron had been jailed repeatedly but had never wavered and had served Punjab and the panth with utmost dedication.

Prof Prem Singh Chandumajra said the SAD-BJP governments were known as governments of the villages because they had always done the most for rural areas. He said the governments led by S Parkash Singh Badal had not only provided unique social welfare benefits to the people but were also responsible for preserving and propagating Sikh culture and values.

Senior leader Jagmeet Singh Brar urged the Union Home minister to conduct an inquiry as to why a Pakistan national was taking all political decisions in the State. He said mp Preneet Kaur had also complained in this regard to former Prime Minister Manmohan Singh.

The SAD President also paid his obeisance at Gurdwara Darbar Sahab on the occasion.