Home Punjab Dhindsa has engaged in illegal act by taking on nomenclature of SAD:... 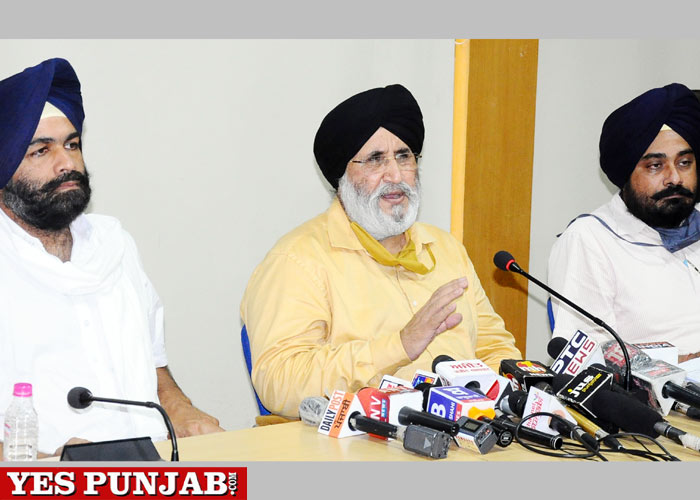 The Shiromani Akali Dal (SAD) today said Mr Sukhdev Singh Dhindsa had engaged in an illegal act by taking on the nomenclature of Shiromani Akali Dal for his outfit on the directions of the Congress party as part of a larger conspiracy against the SAD which would never succeed.

Addressing a press conference here, party Senior Vice President Dr Daljit Singh Cheema said “no one can hold a Mohalla level meeting and make a wild claim about replacing a 100 year old party fully knowing this is not possible as per the constitution of the party.

Mr Dhindsa has gone his own way as is his right in a democratic set up. Our only objection is to the fraud being committed by him by taking on the namesake of the SAD. Mr Dhindsa has been part of the SAD. He knows there is a party constitution and a party structure and delegates elect the office bearers as well as the President of the party. It does not behove a person of his stature to engage in such machinations”.

Dr Cheema said it appeared that Mr Dhindsa had collected a few people today at the instance of the Congress party. “Few other free agents like Mr Balwant Singh Ramoowalia and Mr Manjit Singh GK also participated in the function but made it clear that they had their own political outfits and had not dissolved them to join the new outfit”.

The Akali leader said the real facts were coming out one by one. He said apparently it was the Congress party which had guided Mr Dhindsa and advised him not to have any truck with the SAD (Taksali) on the assumption that doing so would drive away the Hindu community from the outfit.

“We respect the Taksali leaders and they have made a huge contribution to the SAD. Mr Dhindsa should not have run away from using the name Taksali at the instance of the Congress party”.

Dr Cheema also made it clear that both the Dhindsa faction and Aam Aadmi Party (AAP) had become social media agents of the Congress party. “Both these parties are working at the behest of the Congress to form a grand alliance against the SAD. The people will see through this conspiracy and reject them both”, he added.

The SAD leader said as far as the Shiromani Akali Dal (SAD) was concerned, it was a 100 year old party which had come into being after great sacrifices. He said the party had a glorious history and had played a huge role in the formation of present day Punjab besides the concept of Punjabiat.

“The SAD believes in the democratic process. Many people have broken away from the party and formed their own outfits. That is their right. However no one can claim the nomenclature of the party from which he has been expelled as was the case with Mr Sukhdev Dhindsa”, Dr Cheema added.