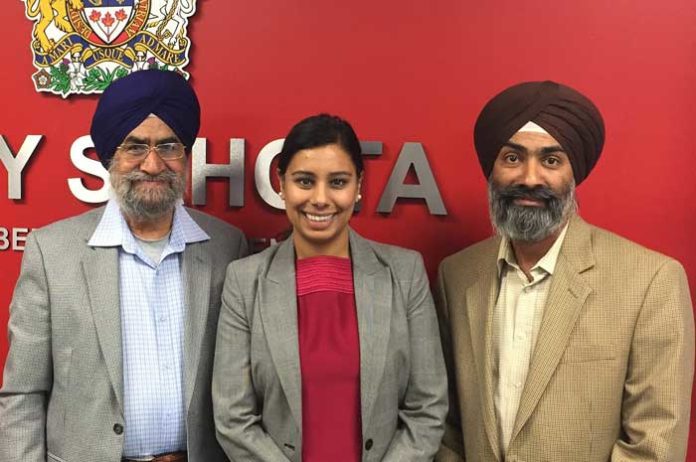 FlyAmritsar Initiative, a civil society global initiative for connecting Amritsar airport to destinations across the world, has thanked Canadian Member of Parliament Hon’ble Ruby Sahota (representing Brampton-North in Ontario) for tabling a petition in the Canadian Parliament requesting the Government to proactively advocate for a direct flight between Toronto/Vancouver to Amritsar, India.

In a statement released to the press & media from Vancouver-Canada Anantdeep Singh Dhillon, Convener (North America) for FlyAmritsar Initiative appreciated the recent efforts of MP Sahota for holding a special meeting with Air Canada representative to apprise them about the needs of residents of her constituency and raise long pending demand of Punjabi diaspora living in Canada about direct flights between Toronto/Vancouver and Amritsar. Hon’ble Sahota posted a statement and video about the petition on her Facebook page.

The FlyAmritsar Initiative also recognizes the efforts made by Hon’ble Randeep Sarai, Member of Parliament from Surrey-Center in British Columbia who had a special meeting last month with Air Canada officials about initiation of flights to link Vancouver with Amritsar.

FlyAmritsar Initiative Global Convener, Sameep Singh Gumtala has requested other Members of Parliament in Canada to strongly support this long pending important demand of the Punjabi Diaspora. Gumtala informed that our team has been constantly writing letters to the Government in Canada and apprising MP’s regarding this demand for the last few years. In September 2017, a FlyAmritsar Initiative team had a special meeting with MP Sahota, regarding this matter.

It is pertinent to mention that meetings were also held in Amritsar by representatives of Indian NGO Amritsar Vikas Manch with Canadian MP’s Hon’ble Randeep Sarai and Hon’ble Sukh Dhaliwal, both from British Columbia during Prime Minister Justin Trudeau’s visit to India in 2018.

In the meetings both the MPs had assured that they will take up the issue of convenient connectivity with the airlines. FlyAmritsar Initiative calls for a joint effort for this cause and supporting the campaign to make this air link possible, said Gumtala.

Yogesh Kamra, Convener (India) for FlyAmritsar Initiative informed that we have been constantly writing to Air Canada and other airlines to apprise them about the demand for flights to link Amritsar directly with Canada. For this great cause, we welcome the initiative taken up the people’s representatives.

The initiative also requests them to kindly take it as a collection effort and bring it to the notice of not only Air Canada but to other airlines like WestJet, Lufthansa, KLM-Air France, British Airways etc. that operates flights to Toronto and Vancouver from their respective country hubs. Start of flights by these airlines will also provide convenient one-stop flights for Amritsar, the most sought-after destination for Punjabi diaspora for connecting to their roots.

Kamra said, Punjab has been struggling since long to increase marginal income of small farmers and there is no industry package being included as well to provide any better means of employment. If these flights are able to connect our NRI community to their roots, it will open up a ever-in-demand fresh vegetables produce from the our region.

Start of these flights will also benefit farming and trading community of the region with export of cargo. Flights to London and Canada will help farming and manufacturing units to export their produce in less than 15-16 hours.

FlyAmritsar Initiative also thanked all community members who jointly submitted a signed petition to MP Sahota demanding these flights and raising the demand with MP’s from different constituencies in Greater Toronto area.