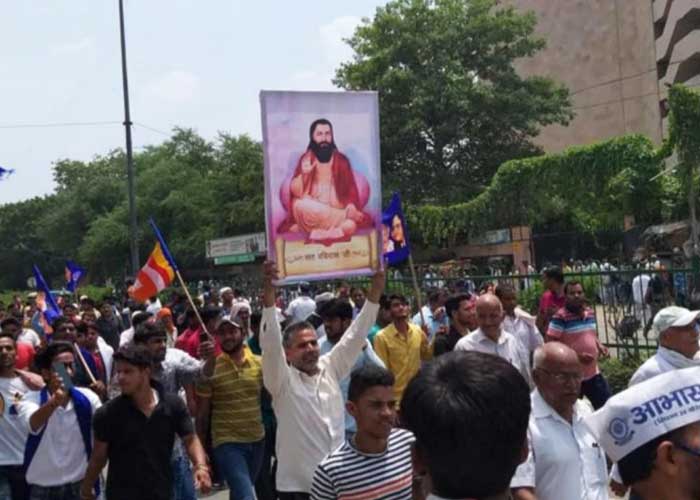 With the Assembly elections in Delhi slated to be held next year, political parties in the national capital have come out in strong support of re-building Guru Ravidas temple in Tughlaqabad after its demolition on the Supreme Court’s orders.

Delhi Social Welfare Minister Rajendra Pal Gautam said it was more about the self respect of the community.

“It is about the faith and sentiments of about 15 crore people. While on one hand, the BJP is fighting to build a (Ram) temple (in Ayodhya) on the basis of faith, on the other, a temple was demolished which has all the documented proof of its existence, ” he said.

Gautam said the temple was important as the saint visited the place and stayed at the site for sometime.

“There are temples, mosques and other religious structures across the city which were build illegally. No one is questioning that. The DDA presented wrong facts before the Court which led to the demolition of an ancient temple, ” the Delhi minister said.

The temple of Sant Ravidas was demolished in forest area in south Delhi’s Tughlakabad on August 10 after a Supreme Court order.

The court said the committee which takes care of the temple — Guru Ravidas Jayanti Samaroh Samiti — have not vacated the land reserved for forest.

While the Delhi government had declared the said land as reserved for forest in 1980, the community argued that the temple was 600 years.

Gautam said that it is incorrect to say that the temple was built after cutting down trees as it was centuries old.

The temple of the 15th century mystic got a new building after the independence.

It was believed that the land was gifted to the sage by the then Delhi ruler Sikandar Lodi.

Born to a community of leather-workers, considered untouchable, Ravidas was one of the exponents of the Bhakti movement. He was also among the community leaders who raised their voice against untouchability.

His followers were spread across the country and world and had protested the demolition demanding a new temple should be built.

Coming out in the support of the community, Congress too said the “DDA presented wrong facts before the court which led to its demolition”.

“The protest is not politically motivated it is about people’s believe. The DDA can and should give the land for the temple. There should not be politics on people’s believe,” Congress leader Jitender Kochar told.

Gautam said the demolition is being done to crush the faith of the community.

“The cruelty on the people of our community has increased since the BJP came to power (at Centre),” Gautam said.

He said there have been incidents about injustice and mistreatment to the people of the community.

He listed incidents from various states where people were killed for having mustache or riding a horse and goes on to that of Rohith Vemula and Payal Tadvi killing.

Gautam said if the Centre or the DDA wanted, “the temple could have been saved”.

Last week, the Delhi Assembly passed a resolution demanding that the Centre must bring an ordinance to allot land for the rebuilding of the demolished Sant Ravidas temple in the national capital.

The Assembly also resolved that the Delhi government should construct a magnificent Ravidas temple at the same site after the Centre allots the land.

During the discussion, Chief Minister Arvind Kejriwal announced that the Delhi government is willing to exchange its 100 acres of land with the Central government if DDA agrees to hand over four acres land to Saint Ravidas committee for its temple reconstruction.

While the AAP legislators blamed the BJP and Centre for the demolition during the discussion on the resolution the BJP MLAs supported the resolution saying Saints are not from one community but belong to everyone.

“BJP supports the resolution. There should be a temple built at that spot. We should not do petty politics over the issue. I, as a BJP worker, ensure that we will do whatever we can in out capacity,” BJP MLA O.P. Sharma had said in the House.

“Delhi government should take initiative and the BJP government will discharge its responsibility of constructing grand memorial to the great saint,” Gupta said.

He assured that if Delhi government removes forest tag from the temple land, Union government will leave no stone unturned in making the place as grand Ravidas memorial.  (Agency)