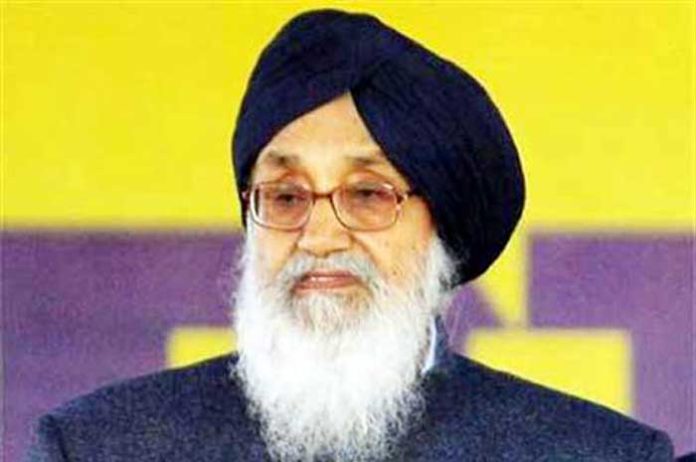 Mr Badal said that these gestures would go a long way in assuaging the hurt sentiments of the Sikh masses, lacerated during successive Congress regimes.

“Every step that strengthens the hands of the forces of peace and communal harmony and cements Hindu-Sikh unity in Punjab and the country should be welcomed by everyone, overcoming personal factors,” said Mr. Badal in a statement here this afternoon.

‘ Whole heartedly thanking’ Prime Minister Shri Narendra Modi and Home Minister Shri Amit Shah for ‘the strong positive gesture’ on the eve of the 550 Parkash Utsav of Guru Nanak Dev ji, Mr Badal said that like on many such occasions in the past , it is perhaps “divinely ordained” that on the auspicious occasion of Parkash Utsav too, there is a government at the centre which is friendly to Punjabis and the Sikhs.

“As always, it is left to the NDA government to apply the ‘healing touch’ to the Sikh wounds. PM Modi started the process of ensuring punishment to the guilty of 84 massacre, end the dreaded Black Lists for overseas Sikhs and re-opened the Kartarpur Sahib Corridor. With the latest decision, he and Mr Shah have carried the process of healing the past wounds of Sikh masses decisively forward,” said the former CM.

Mr Badal also appealed to the PM and the HM ‘to carry this process forward so that all the legitimate religious, political and economic grievances of the Sikh masses are addressed in a just and time bound manner.’ He said that it was unfortunate that successive Congress governments in the past had mocked the Sikh wounds and rubbed salt into them.

Mr Badal said that the Shiromani Akali Dal had for long been advocating a policy of “compassion, understanding and statesmanship” to resolve the long-standing issues of the Sikh community.

He regretted that successive Congress governments at the centre and in the state “paid no heed to the pleas not only of the SAD but even of the well-meaning eminent jurists, journalists, human rights and civil liberties organizations in the country.

If they (the Congress leaders) had listened to the persistent calls from all the right-thinking citizens and opinion makers in the country on the need to address the just grievances of the Sikh community within the framework of the constitution, Punjab and the country could have been saved from the terrible tragedy that lasted almost two decades.”

Mr Badal recalled that as Chief minister of Punjab, he had “repeatedly asked the Government of India to review its policy towards Punjab in general and the Sikhs in particular. “But I had to face utter insensitivity and callousness in the minds of our national leaders during the Congress era. “

The Akali stalwart said the SAD and the SGPC had always opposed the death penalty on a matter of principle. “We had to wage a long and hard struggle to get Bhai Rajoana’s death sentence commuted. The party and the religious body approached the Government of India and met and gave memoranda to the President of India on several occasions.

The former Chief Minister recalled that the issue of executing the death sentence against Bhai Balwant Singh Rajoana was “one of the most sensitive and toughest moments that he had to face as the chief executive during the last SAD-BJP tenure.

But I was clear that both constitutionally and morally, it would have been not only wrong but even disastrous to carry out the execution. I had to choose between doing the right thing or continuing as Chief Minister.

I am grateful to Akal Purakh that He gave me the strength to make the right choice, opting to put my government at stake for the larger cause of peace and Hindu-Sikh unity in Punjab. Our decision not to implement the order on Bhai Rajoana’s execution was constitutionally, legally, morally and politically sound. I was able to stand resolutely against the order.”

Mr Badal said that he had strong reasons for opposing the execution of the death penalty to Bhai Rajoana at that time. “ I was motivated by my firm and unshakable commitment to the cause of peace and communal harmony in Punjab. The country needed to break with the past of bitterness and make a fresh, humane start.

For this, I believed we needed a statesmanlike gesture from the Government of India. In addition, we were able to demonstrate how the spirit of the constitution too would be violated by this death sentence,” said Mr Badal, adding, “The stand I took as Chief Minister at that time has been vindicated today by the decision of the Govt of India headed by Shri Narendra Modi to commute the death penalty.”

Mr Badal said that several memorandum and representations made by the SAD, the SGPC and even by the Punjab government headed by me were pending with the President and the Home Ministry of Govt of India. SGPC and SAD delegations had called on the President, the PM and thee HM on several occasions in the past to pursue the cases of Sikh detenus, including Bhai Rajoana .

”Those have finally borne fruit. I have always advocated that the policy of confrontation does not solve any problem and we need “ patience, tolerance and compassion” to replace confrontation with reconciliation.

All over the world, conflicts are resolved not through confrontation but through reconciliation and mutual understanding and accommodation,” said Mr Badal, adding that peace and communal harmony still remained the most sacred goal of my political career.