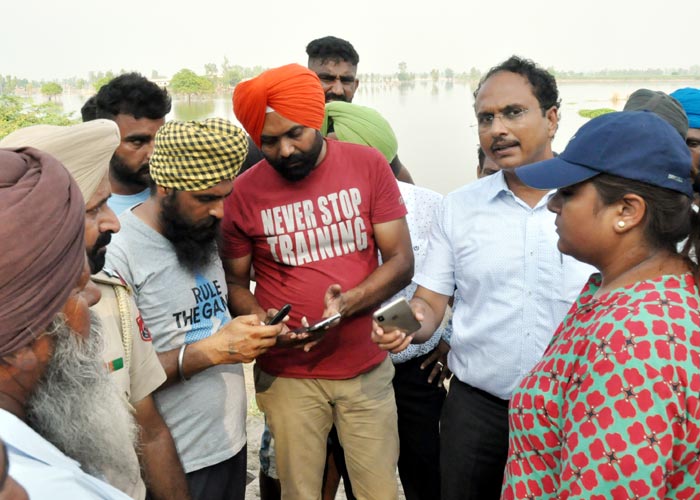 Deputy Commissioner Jalandhar Mr Varinder Kumar Sharma today said that the district administration would make all our efforts to ensure early disposal of flood water along with Jalandhar-Ferozepur Railway track and National Highway number 703 A.

The Deputy Commissioner along with Additional Deputy Commissioner Mr Kulwant Singh and Sub Divisional Magistrate Dr Charumita inspected the water logged area along with the Railway track and National Highway. He said that the breaches that had led to flooding of the area needs to be plugged at the earliest for which administration was already making concerted efforts. Mr Sharma said that it was the need of hour to make sure that this water was disposed off at the earliest for ensuring minimum damage to life and property of the residents besides that to the Railway track and National Highway, which were of immense national importance.

The Deputy Commissioner said that the administration was committed for plugging the breaches in river Satluj in Shahkot Sub Division. He said that the work on filling these breaches was going on war footing and they would be plugged very soon. Mr Sharma said that every effort was being made to put the life back on track by normalising the situation.

The Deputy Commissioner further said that administration has already roped in Indian Army to plug the 500 feet wide breach at Jania village. He also lauded the role of various religious organisations and volunteers for extending fulsome support in this noble cause. Mr Sharma said that all the breaches would be plugged in very shortly.

On the occasion Senior Section Engineer of the Indian Railways Mr Vijay Kumar and others were also present.