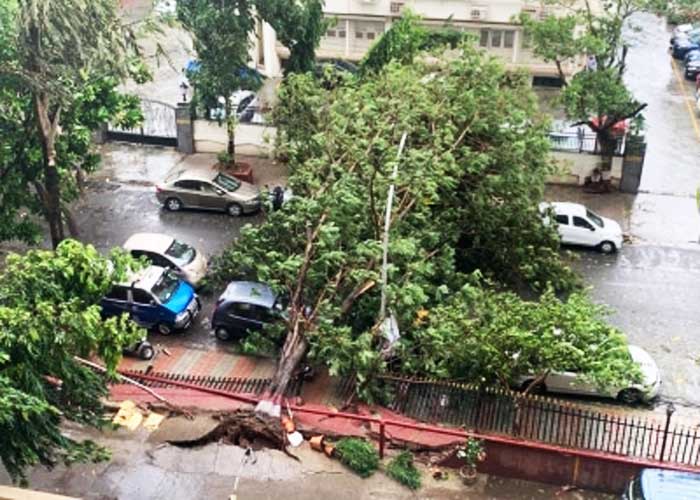 After a wait of 72 hours, Cyclone Nisarga made a thumping landfall at Shriwardhan-Dive Agar in Raigad district, hitting coastal Maharashtra with full fury, officials said.

“The eye of the storm is around 60 km away, it has hit Raigad district at a speed of over 100kmph. Now, it is proceedings towards Uran,” said Ratnagiri Collector Nidhi Choudhari in a statement.

Uran is in the northern-part of Raigad, barely a couple of kilometres from south-central Mumbai which is dotted with towering skyscrapers and slums standing cheek-by-jowl, both at risk in the cyclone, close to the angry churning Arabian Sea.

Several hours before the landfall, Nisarga had already announced its impending arrival with heavy rain in the entire coastal region of Palghar, Thane, Mumbai, Raigad, Ratnagiri and Sindhudurg, accompanied by strong gales of upto 60-70 kmph since Wednesday morning.

Many scores of trees were uprooted, portions of roofs or protective coverings of homes and cottages were blown off in the entire Konkan region, while several vehicles were crushed under fallen trees in Mumbai and Thane.

Big and small trees were blown off their roots in south Mumbai’s Colaba and Churchgate, some in the suburbs and Thane, while huge waves lashed the jetties at Gateway of India, Bhaucha Dhakka, and popular beaches at Girgaum Chowpatty, Dadar, Juhu, Versova, Madh, Marve, Gorai on the city’s west coast.

A medium-size ship was tossed in the waves and got stuck in the ground off Mirya Beach in Ratnagiri, but there were no reports of any casualties.

Chief Minister Uddhav Thackeray along with other ministers and officials continue to monitor the unfolding cyclonic situation while Deputy Chief Minister Ajit Pawar has called up all coastal district collectors and sought ground reports from them.

Rescue teams of NDRF and SDRF, besides the army, navy, air force, coast guard, police, fire brigade, along with expert divers have been on standby at various points in Mumbai to handle any flood like situation.

Maharashtra Fishermen’s Association President Damodar Tandel said that many fishing villages on the entire coastal belt have suffered huge damages due to the storm.

“As per the latest information, most of our fishing boats were moored safely since the past couple of days, but the real damage will be known only after the storm recedes. There are no reports of any casualties or missing fisherfolk,” Tandel told IANS.

The IMD has already declared a Red Alert for Raigad, Mumbai, Thane, Palghar, Nashik, Dhule and Nandurbar – which is the expected path of Cyclone Nisarga on its land odyssey.

Due to overnight rains, several low lying and coastal areas of Mumbai and Thane, besides other districts experienced inundation, but there were no disruptions as most people kept off roads in their homes.

The Mumbai International Airport Ltd will operate only 19, including 8 incoming services, of the scheduled 50 daily domestic flights in view of the cyclone on Wednesday, said an official.

Several long-distance trains on the Central Railway and Western Railway have been rescheduled to avoid the cyclone.

With strict police deployment in the city and its beaches, most Mumbaikars have chosen to remain indoors, catching the real-life cyclone drama on their television sets.

For Maharashtra, the new precautions over Cyclone Nisarga has come as a double-lockdown coupled with the Covid-19 restrictions already implemented since over two months.   (Agency)