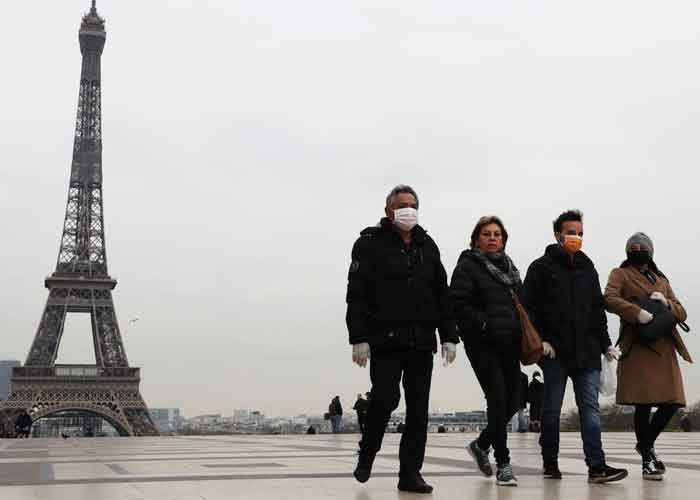 The coronavirus cases in France have reached 52,128, with a death toll of 3,523, General Director of Health Jerome Salomon announced at a daily briefing.

In the last 24 hours, 7,578 more people were diagnosed with the COVID-19, which claimed 499 more deaths, the biggest fatalities caused by the virus in one day, Xinhua news agency reported.

Some 5,565 out of the 22,757 patients hospitalized were in critical condition and needed life support, up by 458 from Monday. Meanwhile, 9,444 patients recovered and returned home.

“It is the daily number of patients in intensive care which is the most important indicator to follow the evolution of the epidemic, and to evaluate the impact of the confinement,” Salomon noted.

In order to cope with the influx and ease pressure on overwhelmed hospitals in the worst-hit regions, the government has transferred, since early March, 288 critically-ill patients to less-affected French cities and to neighbouring Germany and Luxembourg, he added.

“This figure is set to increase in the coming days,” he warned. “In France, we are mobilized to face an epidemic of major impact on the health system,” said Salomon.

In a visit to protective mask factory near Angers in western France on Tuesday, French President Emmanuel Macron announced an “exceptional fund of 4 billion euros” (US $4.4 billion) to finance orders for masks, respirators and medicines.

In January, France had a mask production capacity of six million units per week, while hospitals need 40 million per week. Earlier in March, all stocks and production of masks were requisitioned across the country. Deliveries of masks were organised, with priority given to frontline health workers.

It has ordered more than one billion face masks from China and the first orders are arriving, local media reported.

“Before the crisis, we were producing 3.3 million masks per week. At the end of April, we will be (producing) over 10 million, we will more than triple (the producing capacities) in a few weeks,” Macron said.

With new players — including car parts maker Faurecia, tire maker Michelin and retailer Intermarche — joining in the production, the total mask output would increase to 15 million per week, he added.

The head of state also announced that an industrial consortium bringing together Air Liquide, Valeo, PSA and Schneider Electric, “will make it possible to produce 10,000 heavy and lighter respirators by mid-May.”  (Agency)