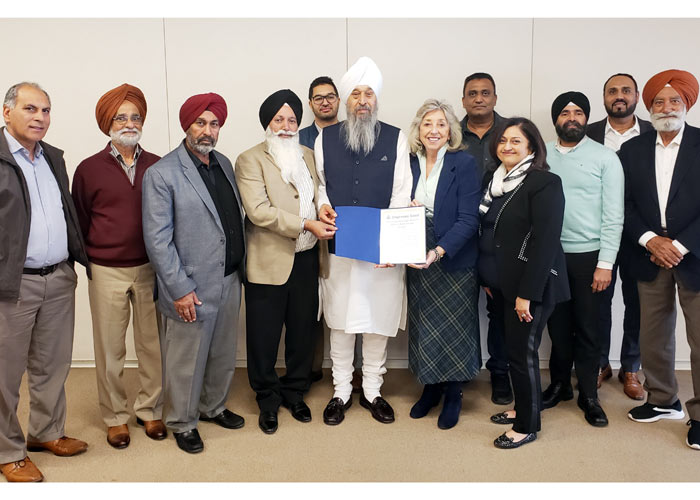 Today, U.S. Congresswoman Dina Titus (D-NV 1st District) who serves as committee member on Foreign Affairs, honored the 550 Years Birth Anniversary of Guru Nanak Dev-Founder of Sikh Faith, by introducing a Congressional Record at the Proceedings and Debates of the 116th Congress, First Session. In the Congressional Record she acknowledged the contributions of the Sikh Americans to the United States.

“I am proud to recognize Sikh Americans by introducing this Congressional Record,” said Congresswoman Titus”.

In a meeting at her office with Sikh members of the local Las Vegas, Nevada community, she said she is committed to work with Sikh Americans in Nevada and all over the country to bring awareness about the Sikh faith.

Dr. Upinder Singh, a local Las Vegas Physician shared the teachings of Guru Nanak Dev with the Congresswoman and highlighted the need to stop bullying of Sikh students at schools and stressed the law enforcement agencies to change their policy so that Sikh Americans can serve with their articles of faith.

Bhai Sahib Satpal Singh Khalsa, Chairman of Sikh Dharma Universal, emphasized the need for much greater awareness of the Sikh Americans in USA and educating airport authorities about Sikhs. He further said that resolutions like this are key part of the Sikh Americans in the United States to engage elected officials and raising awareness of Sikh community in USA to ensure our civil rights are protected and respected.

Many Sikh representatives from Gurdwara Baba Deep Singh in Las Vegas, Nevada were present at the ceremony and shared their views with the Congresswoman.

The Congresswoman agreed to attend the opening of the new building for Baba Deep Singh Gurdwara early next year.

Sikh Dharma Universal is working with many other elected officials, in various states, at the local, state and federal level-as well as the broader public-to recognize the invaluable contributions of the Sikh community in the United States.