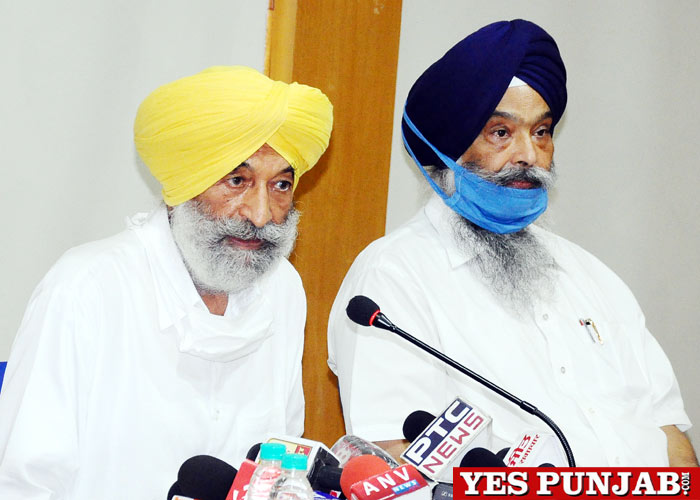 The Shiromani Akali Dal (SAD) today said the Congress government had teamed up with Dera Sachha Sauda to take on the SAD with the sole aim of polling Dera votes in its favour in the 2022 assembly elections in lieu of giving a clean chit to the Dera.

Addressing a press conference here, senior SAD leaders Balwinder Singh Bhundur, Prof Prem Singh Chandumajra, Maheshinder Singh Grewal and Sikander Singh Maluka said the Congress government was in the process of weakening the sacrilege case as part of an understanding with the Dera.

“The Congress first scared Dera Sachha Sauda and has now teamed up with it to use it for its political purposes against the SAD. However by doing so it has only served to exposed its friendship with the Dera”.

Stating that the SAD would not allow the Congress party to do deceitful and immoral politics on the issue of sacrilege of Sri Guru Granth Sahib ji, the SAD leaders said the Congress- Dera conspiracy was already being unmasked bit by bit. “The prime accused in the sacrilege case was killed in judicial custody because the Congress government did not want the truth to come out.

The family of the prime witness in the Behbal Kalan police firing case has blamed a Congress minister and the Faridkot Congress legislator for being responsible for his death. All wires are now pointing towards the Congress party and it is clear that its hands are dirty. Soon the entire conspiracy will be unraveled and will come before the people”.

Senior leader Maheshinder Singh Grewal said the Congress party was trying to cover up its failures and was resorting to cheap politics. He said SAD President Sukhbir Singh Badal had already done ‘ardas’ that that nothing should remain of those who had indulged in the acts of sacrilege as well as of those who were behind it.

He said in direct contrast Congress leaders including mp Preneet Kaur, Rajinder Kaur Bhattal, relatives of Manpreet Singh Badal, Kewal Singh Dhillon and Amarinder Singh Raja Warring besides others never presented themselves before Sri Akal Takth Sahib to received symbolic punishment for visiting the headquarters of Dera Sachha Sauda. He also pointed out that the Dera head’s daughter’s father in law was a Vice President in the Congress party.

Senior leader and mp Balwinder Singh Bhundur said the press interactions held by PCC President Sunil Jakhar and a Dera supporter Veerpal Kaur were also held in tandem. He said while Jakhar tried to cover up the failures of his government by launching a false and malicious campaign against the SAD, Veerpal Kaur tried to spread a canard which was refuted by the very police officer she credited it to.

“It seems Veerpal is also a Congress mole and playing to the tunes of the Congress party”, he said adding the party would take legal action in this regard.

Mr Bhundur said it was strange that a person like Sukhjinder Singh Randhawa, whose father Santokh Singh Randhawa had welcomed the attack on Sri Harmandar Sahib, was now talking about sacrilege.

“Can you imagine that a party which attacked Sri Harmandir Sahib, destroyed Sri Akal Takth Sahib and conducted planned genocide of Sikhs in Delhi in 1984 is talking about sacrilege of Sri Guru Granth Sahib ji? ”

Senior leader Prof Prem Singh Chandumajra said it was three and half years since the Congress party tried to defame the SAD by making allegations against the party. He said it had failed to substantiate any of them.

He said now the Congress was resorting to cheap politics to hide its failures be it fulfilling the promises made to the people, the plethora of scams like the Rs 5,600 crore liquor scam or diverting attention from burning issues like rise in power tariffs, failure to check loot by private schools and denial of SC scholarship of Rs 350 crore to SC students.