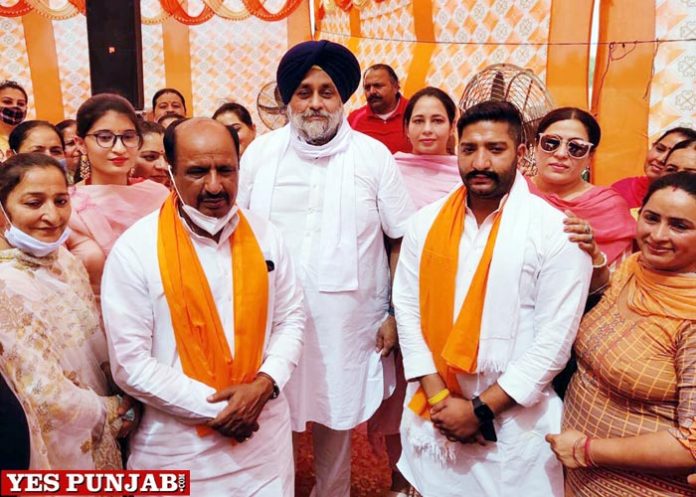 Welcoming Mr Josan into the party fold during an impressive event organised by the former Congress minister at his village Bandi Wala in Jalalabad constituency, Mr . Badal said the party had been further strengthened in the Malwa region. He also appointed Mr Josan as the party General Secretary on the occasion.

Mr Josan, a stalwart of the Congress party, has remained two-time minister in the Congress government, first in 1992-1997, then in 2002-2007 regime and also served as Chairman, Punjab Leather Board in the past. Mr Josan has also unsuccessfully contested against S. Badal in 2009 and 2012.

Noteworthy, Mr Josan resigned from the post of Chairman, district planning board, yesterday, to join the Shiromani Akali Dal. Mr Josan’s son Harpreet Josan, who also joined the Shiromani Akali Dal today with dozens of youth activists, also quit the Punjab Youth Congress, which he was serving as a General Secretary.

Acknowledging the political experience of Mr Josan, the SAD president assured to field him in the forthcoming Vidhan Sabha polls.

While addressing the gathering, Mr Josan said he was impressed with the vision and approach of S. Sukhbir Singh Badal towards the development of the state.

“I have seen S. Badal working day and night for the development of the state, particularly Jalalabad constituency. Impressed, I opted to join the Shiromani Akali Dal and work under him,” he added.

“People of Punjab now repent the day they voted for Captain Amarinder Singh in 2017. The Congress government’s days in office are numbered. A pro-Shiromani Akali Dal wave is gaining momentum across Punjab. Punjabis are waiting for 2022 to come to form SAD-government led by the man of words S. Sukhbir Singh Badal”

Later, assuring Mr Josan and all his supporters that they will get due respect and responsibilities in the party, S. Sukhbir Singh Badal promised that the region would see the restart of all development works, which were put on halt after the change of guard took place in 2017.