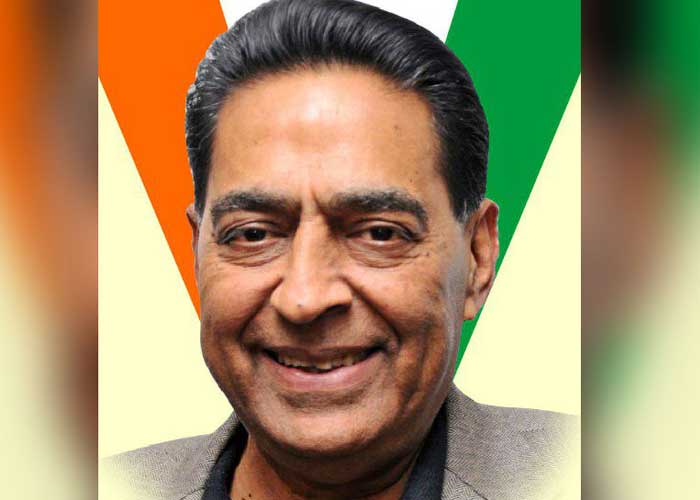 With Assembly elections just a few months away, Congress on Wednesday showed faith in senior leader Subhash Chopra, whose name was approved by interim party President Sonia Gandhi as the new chief of the Delhi Pradesh Congress Committee (DPCC).

With less than four months to go for the Assembly elections, the ruling Aam Aadmi Party (AAP) and the opposition BJP have upped the ante for the crucial polls scheduled for February next year.

However, the Congress, which was in power in Delhi for three consecutive terms from 1998 to 2013, was still looking for a chief for its Delhi unit to lead the party in the run-up to the elections.

The post of DPCC chief fell vacant after three-time Delhi Chief Minister Sheila Dikshit passed away in July this year.

A three-time MLA from Kalkaji, Chopra is a tested name for the Congress and has served as DPCC chief before during the chief ministership of Sheila Dikshit.

“The party needed a tested name, someone who has the experience of dealing with the party leaders and Chopra is a known face among the people, party workers and leaders in Delhi.

“We can never have a replacement for Dikshit, but Chopra was the best option we had. The Delhi unit is happy with his appointment as he can strengthen the party ahead of the elections,” a Congress leader, who did not wish to be named, told.

Also, the Delhi unit of the party had urged the central leadership of the Congress not to appoint any outsider to the post.

The Delhi Congress has been facing infighting and the gap between the top leaders had intensified after Dikshit’s death.

“All the leaders have welcomed the decision as Chopra can take everyone together. Such a face was the need of the hour for the Delhi unit of the Congress,” Kochar said.

After ruling the national capital for 15 years, the Congress was dethroned in the 2013 Assembly polls. The party was then completely wiped out in 2015, as the debutant Aam Aadmi Party (AAP) sweeped the polls winning 67 seats, while three seats went to the BJP.

Chopra said the Congress and the people of Delhi shared a unique bond.

“We (the Congress and Delhi) have known each other for long and the city has also experienced the transformation under the Congress rule,” Chopra said.

Chopra also said the Congress has experience and will do well in the coming elections.

Dikshit, who was the Chief Minister between 1998 and 2013, was appointed the Delhi unit chief in January, ahead of the Lok Sabha polls, to strengthen the party in the national capital.

The Assembly polls in Delhi are crucial for the Congress as they will give the party chance to bounce back in a city it ruled for 15 years until the AAP came to the picture.

After Dikshit returned as DPCC chief, the party’s vote share went up to 22.46 per cent in the 2019 Lok Sabha polls from 15.10 per cent in 2014. Under her leadership, the Congress secured the second position in Delhi after the BJP.  (Agency)