Amid a crackdown by the Supreme Court on stubble burning which is a major cause of pollution in Delhi-NCR region, the Congress on Wednesday said that the Punjab government, which it heads, should find a solution to the problem.

Congress spokesperson Supriya Shrinate said that “Punjab government should take action in accordance with the direction of the apex court” and the party is not defending the Punjab government as it is of the Congress.

She said the administration should find ways to help farmers and ceasing the combine machines is not an option. She hoped that the state governments of Punjab, Haryana and Delhi will take this issue as priority without doing any politics.

Congress General Secretary Priyanka Gandhi has also raised concern on the issue of pollution. She had directed the Delhi Congress leaders to create public awareness through mass contact programme.

On her direction the Youth Congress organised a symbolic protest to convey the message ‘Behtar Kal, Behtar Bhavishya’ over the growing pollution levels in Delhi in which IYC activists distributed masks to the citizens and form a human chain against the growing air pollution.

Priyanka Gandhi herself had tweeted: “The environment is the only true legacy we will leave for future generations, and the health of all our children should be above politics. The public health emergency in Delhi and so many other cities of India is a crisis that we must all find a way to solve. #DelhiAirEmergency.” 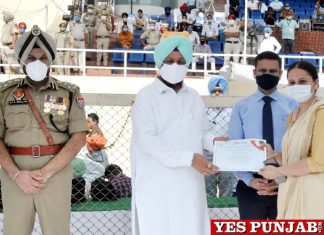