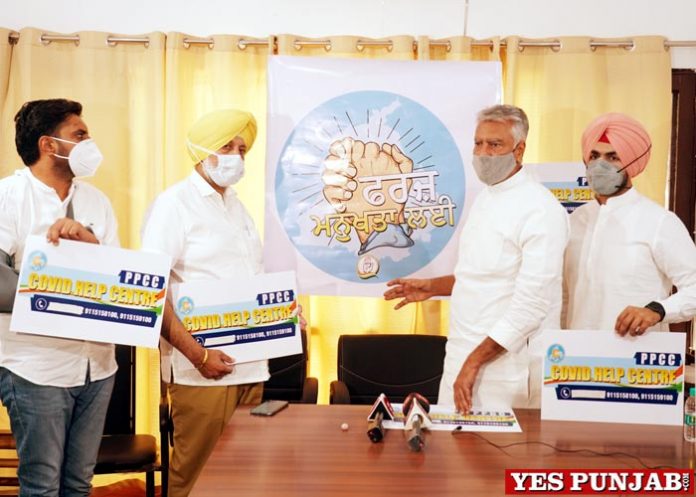 Chandigarh, May 3, 2021 (Yes Punjab News)
PPCC president Sunil Jakhar has said that the resurgence of Congress will start from Punjab, after which the grand-old party will soon restore its old glory across the country. People were rejecting the politics of hate and understanding how some corporates influence programmes and policies of the NDA.

Speaking to media on the occasion of the launch of “service to humanity” help center titled “Farz” for Codid-19 affected families at the PPCC office here in the presence of Health and Family Welfare Minister Balbir Singh Sidhu, Jakhar said that the people of West Bengal have rejected those who had profusely filled their election campaign with hate and arrogance, the poll result is a good sign for the country.

Commenting on Congress’s performance in the elections in five states, he said that now the responsibility of the Punjab Congress has increased further. Punjab will further augment development plans; the party will register victory on the basis of its work in the state in next elections.

“Our victory would prove to be the first step towards resurgence of Congress. As the Modi government was working against farmers and minorities, people had started distancing themselves from BJP.

State party president said that the PPCC help center will work round the clock to help the people who were getting treatment of Covid-19, their families can call here for any kind of help any time.

General Secretary of All India Youth Congress, Amarpreet Singh Lali has been appointed State Coordinator of the center and District President of Punjab Youth Congress Mohali Kanwarbir Singh Ruby Sidhu will be Co-Coordinator.

Jakhar said that the help desk has been started by the party, rising above the political considerations, it is inspired by the service of Bhai Kanhaiya ji and any person can call here for help, committees have been constituted at the district level as well.

Health and Family Welfare Minister, Balbir Singh Sidhu said that of course the government was making great efforts but with people’s participation we can win the war quickly. He said that the spread of the disease in the villages is very dangerous, special efforts need to be made to make people aware in rural areas.

He appealed to the party workers to carry an awareness campaign, motivate people to get Covid tests done if they show slight symptoms or come in contact with positive tested people. People aged above 45 years must get vaccination done.