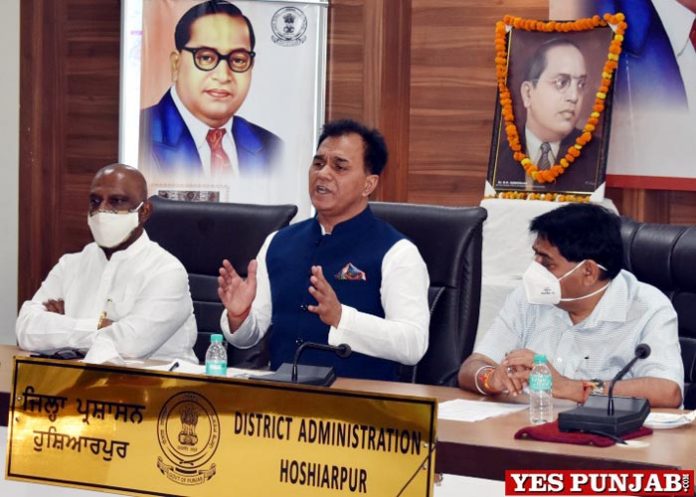 Hoshiarpur, April 14, 2021 (Yes Punjab News)
On the occasion of 130th birth anniversary of Bharat Ratna Dr. B. R. Ambedkar, the Chabbewal MLA Dr. Raj Kumar has requested the Punjab Government to come up with Overseas Post Matric Scholarship Scheme for SC Students, who after pursuing higher education in foreign shores returned to serve the nation.

While participating in a virtual event to mark the 130th birth anniversary of architecture of Indian constitution Dr. B.R. Ambedkar said this move would not only fulfil the aspirations of SC students but also enable them to contribute in Punjab’s development after getting higher education from abroad.

He recalled that the then Maharaja of Baroda had facilitated Dr. Ambedkar with higher studies in foreign country, who fulfilling the aspiration of underprivileged sections proved his mettle across the globe.

He urged the Chief Minister to start this scheme with personal initiative as this would be a real tribute to Dr. Ambedkar and his ideology. Preliminary, the scheme could be started with a group of ten students with a gradual increase in numbers, he added.

The Punjab Government’s initiative of its own Dr. B R Ambedkar Post Matric Scholarship Scheme is a landmark decision, which secured the future of lakhs of eligible students as the Centre left the scheme in lurch.

Lashing out at BJP led center government for discontinuing the post matric scholarship scheme, the MLA said Punjab’s scheme also forced the Centre to revisit the scheme and re-launched the same with 60:40 ratio, which in fact immensely beneficial for the students of entire nation.

He said implementing Dr. Ambedkar’s message of social, economical and religious equality in society in letter and spirit would be a real tribute to him.

Industry and Commerce Minister Sunder Sham Arora while paying floral tribute to Dr. B.R. Ambedkar at the District Administrative Complex said Dr. Ambedkar was an institution in itself who spent his entire life serving humanity and advocating for human rights.