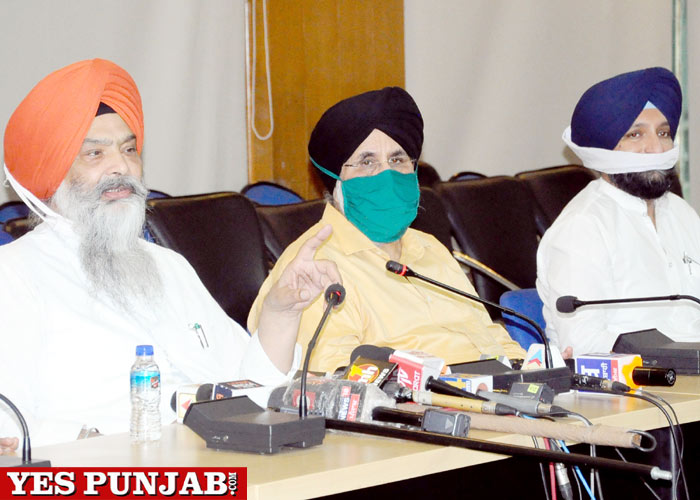 The Shiromani Akali Dal (SAD) today asked chief minister Capt Amarinder Singh to compensate farmers of four districts for the losses suffered by them instead of compensating liquor and mining contractors besides demanding action against distilleries and excise officers who had caused losses of thousands of crores to the State exchequer.

Addressing a press conference here, senior SAD leader Prof Prem Singh Chandumajra also asked the government to come out with a practical solution including use of MNREGA man days coupled with Sate and farmer share to offer a concrete proposal for State labour so that it could be engaged in paddy transplantation. He also demanded the government disclose how much funds it had received from the centre to combat COVID-19 and how much money it had spent on this task till now.

Talking about the Rs 826 crore concessions given to liquor and mining contractors despite the fact that the State had lost excise revenue of Rs 5,600 crore in the last three years, Prof Chandumajra asked why nothing was being done to compensate farmers of Patiala, Ropar, Mohali and Fatehgarh Sahib districts for extremely low wheat yields due to excessive rains.

He said the farmers of these districts, who had suffered a loss of Rs 350 crore due to a two lakh metric tonne drop in yield vis a vis last year, had not been given one rupee in compensation. “I appeal to the chief minister to be sensitive to their distress also and release compensation to them from the Rs 6,000 crore State Disaster Relief fund”.

Prof Chandumajra also asked the chief minister to follow up the excise raids done on distilleries with prompt action. “It is apparent that truck loads of illicit liquor and ENA was moved out of the distilleries without paying any excise to the State due to which all ETOs assigned to the distilleries have been transferred.

All ETOs guilty of being party to loot of the State treasury should be dismissed immediately. Simultaneously distilleries belonging to Congress leaders as well as the Religious Advisor to the chief minister should be asked to deposit the loss incurred by the excise department back into the State treasury”.

Speaking about the letter written by the chief minister to the centre requesting to allow the State to pay labourers engaged in paddy transplantation through MNREGA funds, Prof Chandumajra said the State should come out with a package to make transplantation of paddy a viable option for Punjabi labourers who had opted out of this work since a few decades.

He said a tripartite arrangement between the Centre, State and farmers could be worked out to give an attractive and workable remuneration to local daily wagers since farmers would have to rely on them in the absence of migrant labour.

The SAD leader also asked the chief minister to tell how much money had been received to combat COVID-19 and how much money the State had utilized out of these funds.

He said Punjabis felt that the government had abrogated its duty towards health infrastructure as well as health staff with even Congress legislators and MPs complaining about sub-standard PPE kits being supplied to doctors and para-medical staff. He said as per his information, the centre had released Rs 6,611 crore to the State post lockdown including Rs 112 crore under the National Health Mission head.

He said two installments were received yesterday including Rs 823 crore as State’s share in devolution of central taxes and duties for the month of May and Rs 122 crore as another grant. He said besides this Punjab also had Rs 6,000 crore accumulated with it under the State Disaster Management Fund.