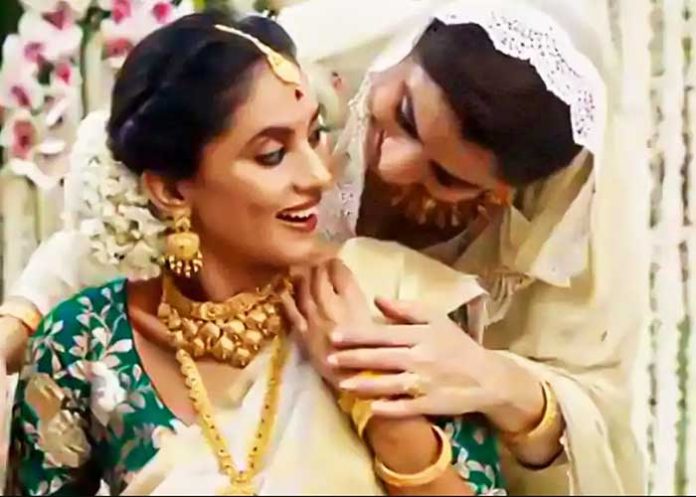 On October 9, jewellery brand Tanishq circulated an advertisement that showed a Hindu woman and her Muslim mother-in-law. This 45-second ad on YouTube was named Ekatvam. It conveyed how the woman was married into a household where her in-laws treated her as if she was their own daughter. For the sake of the daughter-in-law they performed rituals they would not do usually. It was the union of two religions and the beautiful unification of their cultures.

Soon after the advertisement was posted, Congress leader and writer Shashi Tharoor welcomed it with praises. Along with Richa Chaddha, several actors sent their congratulations for the ad. Their opinion was that this was an amazing message for Hindu-Muslim unity.

The situation went to the point that Tanishq had to take down the advertisement. Titan, a Tata company, issued a statement saying the advertisement was not intended to hurt religious sentiments. Yet, for the sake of all, the ad was withdrawn.

Despite the withdrawal of the ad, the controversy over it persisted. The renowned adman, Prahlad Kakkar, stated that none of those ‘trolling’ the ad on social media were everyday people. Trolling was premeditated. In most of the cases, it was done on behalf of a political party.

In 2019, there was a similar controversy over a Surf Excel advertisement. It depicted a Muslim boy on Holi, anxious that he would be splashed with colours by some Hindu boys. A little Hindu girl protects him by soaking in all the colours splashed by them. She is later seen taking the boy — his white shirt without a blemish — on her cycle to the mosque.

This controversy has a counter explanation as well. It is being said that our society is yet to be modernized to the extent that ‘cultural transfusion’ is easy. When the ‘unification of the mind’ does not take place in reality, this sort of ‘forcible societal reformative ad’ from outside has a negative effect on society. And hence companies like the Tatas have to step back with such advertisements.

So, what does the majority of this country want, even I am not aware. It is true that in Varanasi, the Kashi Viswanath temple is attached to the old mansions of Hindu Brahmin families — along with it the Muslim settlement at Madanpura is historic as well.

These two societies stay harmoniously, but the question persists whether each religion is aware of the other’s customs, rituals and festivities. I was a student at the Ramakrishna Mission school in Narendrapur.

Both sons of Kazi Aniruddha studied there. The elder son, Kazi Anirban, two years our senior, was a student of Fine Arts. He ranked first in his batch. I never thought of him as a Muslim. Again ‘Bangabandhu’s’ close colleague’s son, Sapan Jamal, was in our batch. We would eat together and move around all the time. Hindu or Muslim? Whoever asked that question?

A few days ago I heard from the General Secretary of Belur Math, Swami Suvirananda, that a young Muslim man from Afghanistan had once become a monk. He was still alive — nearly 95-years-old now. Again, many Hindus are converted as Muslims. This, in no way, is an issue of the government or the state. This is an entirely personal and societal issue.

Why just Hindus and Muslims — it is good to have matrimonial bonds with those from other religions too. A few days ago I read my friend, journalist Suman Bhattacharya’s book, ‘A letter from a Hindu father to his Muslim daughter’. After reading Suman’s letters to his daughter, Krittika Tabbasum, I wondered where was the Hindu-Muslim controversy? Suman’s life partner’s daughter, his daughter — this was human relationship.

After reading the book, I learnt that Suman knew nothing about the Gayatri Mantra or Saraswati Mantra — he learnt them from his wife, even though she was Muslim. This is our India! They have offered sheets (chadar) at Haji Ali in Mumbai and sipped on lassi on the ghats of Varanasi.

Why did Sara Ali Khan worship at the Kashi Vishwanath Temple and why was she present during the evening prayer on the Ganges! Regarding this as well controversy arose. Sara’s father, Saif Ali Khan, is a Muslim by religion and her mother Amrita Singh, a Hindu. The UP Brahmin association was extremely unhappy that the temple authorities had allowed them to worship there.

What if this identity of ‘Hindu’ and ‘Muslim’ gets another identity, where is the problem? This pressure is not new to BJP or the Sangh Parivar. The RSS believes that every Indian is Hindu. However, Atal Bihari Vajpayee told me, “I prefer the term Indian nationalism more because what if a few people misunderstand when I say Hindu nationalism? Then what is the point of screaming Hindu nationalism by force!”

Vajpayee had said the same thing on national news media in interviews when he was Prime Minister — although Lal Krishna Advani was in favour of the term Hindu nationalism.

My own thought process has gone through various changes. Today I feel India is the melting pot of various identities and, hence, India has remained and will remain integrated throughout. What’s the need for running the steam roller over Muslim religious entity and forcibly calling them ‘Hindu’?

At Sri Ramakrishna’s Sadhan Marg, there was Islam as well. He took religious teachings on Islam from Sufi saint Govinda Ray. He would perform the namaaz everyday. Mentally, he transformed himself into a Muslim. He even wanted to consume beef but Rashmoni’s son-in-law Mathura Mohan forbade him from such an act. But Sri Ramakrishna did consume the ‘forbidden food’ of the time, that is chicken.

At Narendrapur, in our prayer book, where the verses of all religions were written, there was Sri Sri Muhammad Sangeet. A few of my friends used to say this was Islam’s Hindu perspective. But even for Islam, it was necessary to keep the viewpoint towards Hinduism. If the concept of Majority and Minority is not abandoned then how will ‘Akhand Bharat’ form?

Sameena Dalwai, a professor at Jindal Law School has, in a newspaper column, has written that her parents had never heard of the term ‘Love Jihad’. Sameena’s parents met for the first time in 1971. They were members of the Yuvak Kranti Dal.

Both would protest against exploitation of labour. Her mother was the daughter of Nalini Pandit and her father was a Konkani Muslim. There was consternation in the Hindu household about the marriage, many people warned that Muslims had the custom of triple talaq, and the marriage would not last!