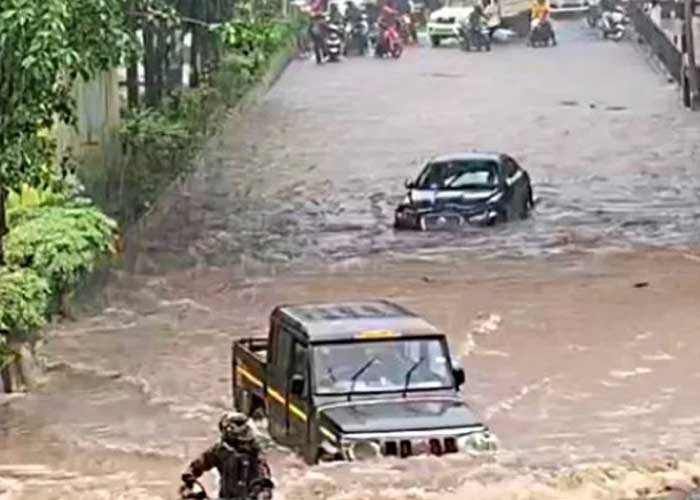 Amid heavy rain that has disrupted normal life here, with people posting pictures and videos on the citys flooded roads, a video has gone viral showing a Jaguar is stranded in a flooded underpass at Airoli in Navi Mumbai, but an Indian-made SUV Bolero zips past despite the flooding and gets to the other side of the road without any incident.

After watching the video, netizens started comparing the two vehicles and even Mahindra Chairman Anand Mahindra reacted, but said he won’t brag about it.

He tweeted: “We won’t brag over this. It’s an unfair contest. The Bolero is meant to negotiate such landscapes (seascapes?)…But now you know why the Bolero’s my favourite vehicle to drive.”

Soon, Twitterati left thousands of responses on the same thread.

“That’s great to hear that all our vehicles can drive past such rough conditions,” wrote a user.

For many, the comparison was odious. The “Jaguar is sedan and Bolero is like SUV… so difference is due to height , ground clearance,” wrote another user.

“Free marketing and like the BOSS that he is, Mr Mahindra did not miss the opportunity,” tweeted one user.

In another tweet, Mahindra shared a video of the Pope travelling in a Mahindra KUV100 in Mozambique.

“His Holiness, the Pope travelling in a Mahindra KUV100 in Mozambique. A moment of pride & immense honour for all of us. Our distributor in Maputo supported the Pope’s Feed the Project & earned this honour. You always Rise when you do good,” he wrote.  (Agency)