Home National City of Taj gears up to welcome Trump, gets a makeover 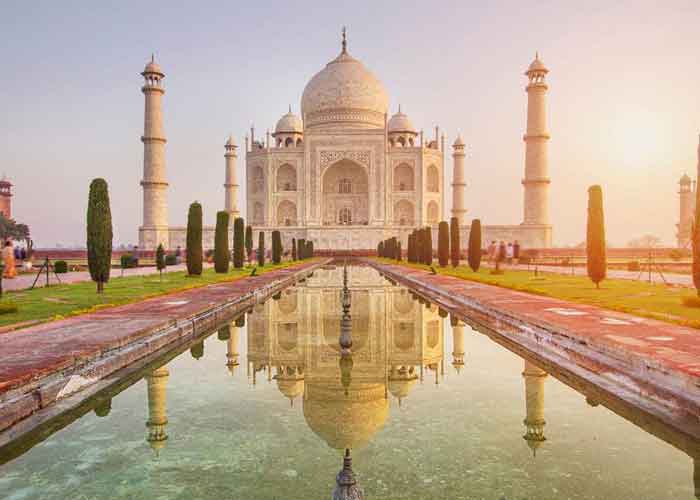 With US President Donald Trump all set to visit Agra on Monday to see the Taj Mahal, the local administration is working in full swing to give the historic city a revamped look with the wall paintings, flowers along the road, and posters and cutouts placed on several streets.

The encroachments have been removed, traffic crossings beautified, under construction buildings covered with huge posters of Prime Minister Narendra Modi and Trump and roads are being widened and re-paved.

According to local authorities, walls have been adorned with paintings reflecting the Brij culture and architectural heritage of Agra, Victorian-style lamp posts have been installed and the lawns of the iconic Taj Mahal bedecked with colourful blooms as the historic city gears up to welcome the US President.

Trump is slated to arrive in Agra on Monday evening after attending the mega ‘Namaste Trump’ event at the newly built Motera cricket stadium in Ahmedabad with Modi.

The officials in the city said that the city is all geared up for the big day and preparations are in full swing to present the “best face of Agra”.

“We are fully prepared, and we wish to present the best of Agra to the US President and his delegation. At the Kheria airport, upon his arrival, expected at around 4.30 p.m., hundreds of artists will welcome him with ‘mayur nritya’,” an official said.

Security has been stepped up in the city ahead of the Trump’s visit, his first to India.

His daughter Ivanka, son-in-law Jared Kushner and a galaxy of top US officials will be part of the high-level delegation accompanying him during his visit to India on February 24 and 25.

In Agra, the Trump family will spend about an hour at the Taj Mahal before sunset. They will then leave for Delhi.

Authorities said a multi-level security cover will be in place for the visit and police and paramilitary and other forces are keeping a hawk-eye vigil in the city.

Agra Zone’s Additional Director General of Police, A. Satish Ganesh told: “Huge police deployment has been put into place in addition to personnel of the US Secret Service, and officials of the National Security Guards (NSG).”

He said the UP Police have done a massive preparation for the US President’s visit leaving no chances.

He also said that the several tier security apparatus has been arranged looking at the high profile visit to the historic monument.

Asked about the total number of security personnel deployed for the Trump’s visit, he said: “I cannot reveal the numbers but police forces have been called from several other districts to meet the standards of the security.”

According to the local officials, Trump’s convoy route from the airport to the Taj Mahal will span about 13 km, and along the way thousands of artistes will welcome him with special performances.

A senior local officer, wishing not to be named, said that along the route, 21 designated areas have been marked, some with stages and others on the ground level, where artistes will present the dance forms of Brij region (Mathura-Vrindavan), like Krishna Lila, dances themed on Radha, and other cultural assets of the region.

Huge billboards bearing images of Trump shaking hands with Modi have also been put up across the city to signify the friendship between the two countries.

In the main city, old roads have been repaired, road-dividers painted afresh, illegal hoardings and posters removed, and walls along the route that President Trump would take have been decorated with paintings reflective of the Brij culture and architectural heritage of Agra.

At many places, artworks greeting Trump have been made by artists, who are busy giving last minute finishing touches ahead of the visit.

The officer said that administration is ensuring that water is being sprayed regularly so that there is no dust.

Even in several areas neighbouring the mausoleum, many shops are sporting a uniform signboard as directed by local authorities.  (Agency)