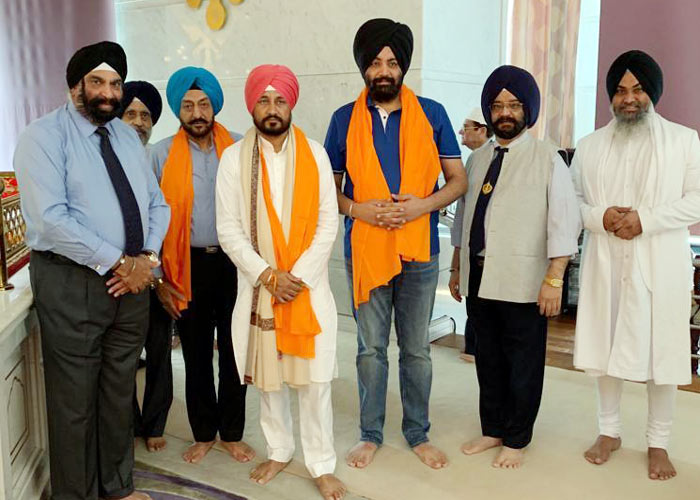 The Punjab Government is inviting the ‘Nanak Naam Leva’ Sikh Sangat across the entire globe to participate in the 550th Parkash Purb celebrations of Sahib Sri Guru Nanak Dev Ji. As part of the strategy chalked out, the Tourism and Cultural Affairs Minister, Mr. Charanjit Singh Channi led a delegation reached Dubai to extend the invitation to the Sikh Sangat living there.

Mr. Channi said that he has come to extend an invitation to teh sangat of dubai on behalf of the Chief Minister Captain Amarinder Singh. He appealed to the dubai sikh sangat to participate in the celebrations to be held by the Punjab Government from 1st-12th November, 2019 at Sultanpur Lodhi.

The minister reached Gurudwara Sahib Guru Nanak Duaar. He met the President of the Gurudwara Prabandhak Committee Mr. Surinder Singh Kandhari and other members and handed over the invitation on behalf of the Chief Minister, Captain Amarinder Singh. The minister also apprised the NRI Punjabis that a huge tented city is being erected by the Punjab Government at Sultanpur Lodhi for the sangat coming to participate in the parkash purb celebrations. Other facilities sucha s boarding, lodging, medical care, local transport would also be provided.

The Gurudwara Prabandhak Committee honoured Mr. Channi and other delegation members by presenting them Siropa.